Jenkins to send cops to games 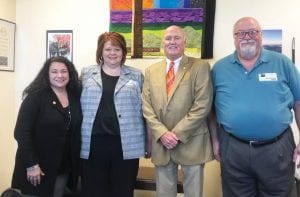 State Senator Johnny Ray Turner, second from right, announced this week that he his co-sponsoring Senate Bill 126, which would end the state mandate requiring school board members in Letcher County, Jenkins and elsewhere in Kentucky to take 12 hours of yearly training on charter schools (see story inside). Turner, of Prestonsburg, is seen here with State Rep. Angie Hatton, left, after the two met in Frankfort recently with Letcher Schools Supterintendent Denise Yonts and her husband, Rocky.

At its February meeting this week, the Jenkins City Council agreed that a police officer should be present at sporting events held on school property. The decision came after Jenkins Athletic Director Ashley Addington addressed the council.

Addington told the council a fight broke out at a basketball game last weekend and when she called for assistance she was told to call 911. Addington said this is the second violent incident in recent weeks, but the first one was broken up without incident.

Addington said police presence at sporting events is necessary, even if officers just walk in to show their presence. She said Jenkins High School is hosting the 59th District Basketball Tournament during the last week in February, bringing with it large crowds, extra traffic and parking congestion. Mayor Todd Depriest said the police department will try to have a presence at future games.

In a related matter, Depriest told Councilman Chuck Anderson that a new way of reporting police activity is being developed that will include more data and will be easier to distribute. At last month’s meeting, Councilman Rick Damron asked for a more informative police report and at that time Depriest said he would work with the Jenkins Police Department to provide one. City Attorney Randy Tackett told Depriest he should be careful to ensure that laws regarding confidentiality are followed in the reporting.

In other business, the council accepted and opened bids for new rescue gear for the Jenkins Volunteer Fire Department. A number of firemen attended the meeting and Fire Chief Rick Corbett told the council the JVFD has been awarded a grant for $43,300 to purchase new extraction equipment that is suited to newer vehicles that are composed of different materials than older models.

City Attorney Tackett opened and read four bids that all came in under the amount of the grant. The bids all covered basic equipment such as spreaders, cutters, pumps to power the equipment and other special tools. However, each was phrased differently and Mayor Depriest suggested that the firemen take the bids back to the firehouse to look more closely at each bid. Corbett said a committee has already been formed to evaluate the equipment and it should be able to report back to the council soon.

City Attorney Tackett also read Resolution 020320 that allows the city to participate in the 2020 Kentucky Municipal Road Coop Program. In June 2019, the council voted to enter into the Road Aid Contract with the Department of Rural and Municipal Aid of the Commonwealth of Kentucky Transportation Cabinet. At that meeting, Mayor Todd Depriest told the council the Municipal Road Cooperative Agreement the city was entering into with the state would provide it with funding for emergencies, such as the slip that closed the road at Dairy Hollow.

On Monday, Depriest said the slip had cost the city quite a bit of money and participation in the Cooperative Agreement will offset the cost of similar emergencies in the future. The council voted unanimously to approve the resolution.