Jenkins too much for LCC girls 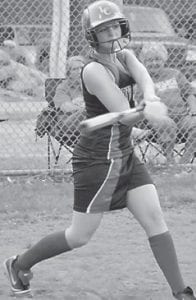 The Jenkins Lady Cavs traveled to Whitesburg for a game with county rival Letcher County Central on April 14 and came away with a 14-3 win.

The Lady Cavs scored the game’s first runs in the bottom of the fourth inning. Centerfielder Ali Goff led off the inning with a single and advanced to second on a ground ball by right fielder Sarah Belcher. Goff then stole third and scored on a Lady Cougar throwing error. Shortstop Emily Walker followed with a base hit and then scored on a double by first baseman Sierra Kiser.

Kiser later scored on a base hit by Alexis Watts and another Lady Cougar error, making the score 3-0 in favor of the Lady Cavs.

The Lady Cougars countered and scored two runs in the bottom of the fourth, cutting the Lady Cav lead to one run when second baseman Emily Blair reached on an error and third baseman Micca Boggs smacked a long homerun over the fence in centerfield.

The Lady Cavs scored twice in the fifth, running the score to 5-2 and extended the lead to 9-3 in the sixth.

After holding the Lady Cougars scoreless in the bottom of the sixth, the Lady Cavs rallied in the seventh and sent 10 batters to the plate, scoring five runs to put the game out of reach.