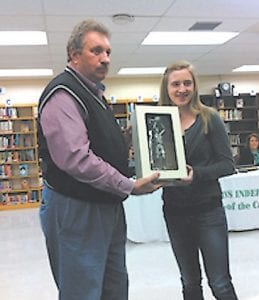 Jenkins High Principal David Lee presented a framed photo to Lady Cavaliers junior star Whitney Creech, who is leading both the state of Kentucky and the nation in scoring. Creech, a guard and forward for the Lady Cavaliers, is averaging 42.3 points per game, well above the 36.3 points-per-game clip registered by Taylor Emery of Freedom High School in Tampa, Florida. The presentation was made earlier this week after Creech was honored by the Jenkins Independent Board of Education.

Students in the Jenkins Independent Schools System will lose at least three days of their scheduled spring vacation because of the number of weather-related days they have already missed.

Superintendent Freddie Bowling told the Jenkins Board of Education at its February meeting that while he doesn’t like the idea of taking days from the vacation period, it is necessary to keep the students from being in school so late in the summer in order to make up the 17 days already missed.

Jenkins Middle High School Principal David Lee told the board the changes mean the senior class will miss one day of classes (March 30) as they return from their senior trip to either Charlotte or Atlanta. However, Lee said the trip counts as educational advancement because of the learning-related activities on the trip and will not count against overall attendance.

Board member Brenda DePriest agreed that it is never pleasant to take away even a part of spring break, but said the prospect of having a couple days’ vacation is better than none. The board voted unanimously to amend the school calendar to set March 30 – April 1 as regular school days and April 2 and 3 as spring vacation.

In other business, the board voted unanimously to authorize Principal Lee to negotiate with the Holiday Inn at Norton, Virginia as the location for the coming junior-senior prom. Lee said he had looked at sites in Pikeville, but the venue prices and cost per student were too high. Lee said the Holiday Inn charges $200 for the evening, with the cost per student for dinner $15. The hotel is located in downtown Norton.

Board Chairman Tracy Goff said he was approached by some parents who asked that the prom be held as close to Jenkins as possible, but agreed that Norton appears the only site suitable.

“I think I’m safe in saying we need to pick a place,” said Goff. “It sounds like the Holiday Inn is the place.”

Jenkins High School Football Coach Daniel Sexton showed the prototype for the new home football jerseys to the board and asked for its approval. Sexton said the jerseys will be green with white sleeves and will sport both a picture of the iconic Jenkins Cavalier and the letters “CAVS.” Sexton said the board that the team has an adequate supply of “away” jerseys and will only need new ones for home games. The board approved Sexton’s request unanimously.

Technology Director Damian Johnson reported that he has been working with a representative of Pomeroy IT to address the remaining issues in the district’s new Wi-Fi system. Johnson added that he has used a new identity program to set up visitor and guest access to the system.

The board approved Johnson’s request to accept a proposal from Gearhart Communications of Harold for the fiber optic line that connects the Middle High School with Burdine Elementary School. He said the rate had been reduced and the cost is even lower with the McRoberts School no longer in use.

Superintendent Bowling asked the board to ask the state for permission to spend $35,000 to replace the “home” bleachers on the lower level of the high school gymnasium. Goff said the bleachers are in poor shape and need replaced before someone gets hurt. He added that it would cost an additional $2,500 to remove the old ones. Jenkins will host the 53rd District Tournament next year. The board voted unanimously to approve the request and the proposal will now go to the Kentucky Department of Education for their approval. The board also approved the hiring of Alt-32 Architecture of Lexington to plan the bleacher replacement project.

Elementary Principal Stacy Collier told the board that 97 students signed up for “pee wee” basketball at Burdine and that while scheduling is a challenge, she couldn’t be more pleased with the high turn-out. The first game was scheduled for March 3, but will have to be rescheduled.

Jenkins Lady Cavs junior basketball star Whitney Creech was honored by the board for leading the nation in scoring in girls’ high school basketball. Lee presented Creech with a trophy to commemorate her achievement of averaging 42 points per game, and said that Creech is not only a fantastic athlete but an excellent student.

“One of the best,” said Lee, adding that her parents have done a great job raising her.

• Director of Pupil Personnel Rondall Baker told the board that attendance for the year stands at 93.83 percent with enrollment holding steady at just under 500. Every class has more than 90 percent attendance.

• Federal Programs Director Sherry Wright said March 3 is the current date for students to take the ACT test and the alternate date is March 17. She added that if weather forces the district to use March 17 for the testing, there would be no back-up date.