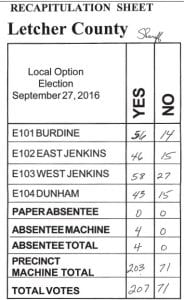 Residents of the four precincts in the City of Jenkins voted overwhelmingly Tuesday to approve alcohol sales at retail outlets in the city’s limits.

While the vote was successful, it will be some time yet before the sales can legally begin, as the Jenkins City Council has to develop an ordinance regulating the sales, pending approval by the Kentucky Alcoholic Beverage Control Commission.

After the ordinance is approved the ABC will determine which store or stores may sell hard liquor and wine and which can only sell beer.