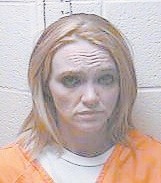 A Jenkins woman recently pleaded guilty to her involvement in the 2011 shooting death of an Atlanta man.

Angela Renee Mays, 31, of 936 Premier Subdivision, has been sentenced to a maximum term of 10 years in prison for her role in the murder of 39-year-old Walter Johnson Jr. inside the double-wide mobile home where Mays was living on March 24, 2011.

Mays pleaded guilty on June 26 in Letcher Circuit Court to an amended charge of criminal facilitation to murder, complicity to first-degree robbery and complicity to tampering with physical evidence.

She was sentenced by Letcher Circuit Judge Samuel Wright III on July 24 to five years imprisonment for the criminal facilitation charge, 10 years for the robbery charge and five years for the tampering charge. All charges are to run concurrently, with 10 years being the maximum sentence.

Mays, represented in court by Barbara Carnes, will receive 838 days of jail credit prior to when she was sentenced.

Alfred White, 43, of Jonesboro, Ga., was charged with murder shortly after the shooting. Indictments charged White, Mays and Tom Edward Blair, of 159 No. 3 Hill, Goodwater Fall, with complicity to murder, complicity to first-degree robbery and complicity to tampering with physical evidence.

Mays called police to report what she said was an accidental shooting in the home she was sharing with David Wyatt, who was present at the time of the shooting.

Johnson, Mays and Blair had been seated at a kitchen table pushed up against a window when the shooting took place. Johnson was positioned across from the window with his back to the living room, from where White allegedly emerged to shoot him in the back witha9mmhandgun.

A source familiar with the case said Mays distracted Johnson by showing him pictures her child had drawn. Mays and Blair told Kentucky State Police Det. Randy Combs they looked up and saw White standing behind Johnson with a handgun shortly before they heard the shot. Johnson was shot once in his back near his spine and rib area. Mays and Blair told police they were surprised to hear the gunshot.

Combs testified during White’s preliminary hearing that Mays and Blair were told by White to provide false information to police and give White enough time to flee the crime scene before police arrived. Combs also testified that Blair also made a statement that White had mentioned killing Johnson earlier on the day the shooting occurred.

Combs said Johnson and White were in Jenkins “for the purpose of distributing and selling crack cocaine.” He said Johnson was said to have had “a substantial amount of cash” ranging from $7,000 to $8,000 on him at one time, but neither a large amount of money or drugs were recovered.

White and Johnson were friends who traveled together and had spent the previous night in the home. Combs said White and Johnson had an argument earlier that morning, but said the argument wasn’t going on at the exact time of the shooting.

Police found a 9-millimeter handgun hidden under clothing in one of the bedrooms of the trailer. Combs testified that Blair said he saw White bury the gun in leaves, remove it and then place it in another location.