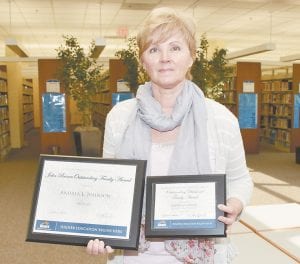 Andrea Johnson of Jenkins displays the awards she won at Hazard recently.

The faculty at Hazard Community and Technical College has awarded its highest teacher honor to Andrea Johnson of Jenkins by naming her the recipient of the John Brown Outstanding Faculty award.

Mrs. Johnson was announced as the winner recently during HCTC’s commencement. She also received the Division Award for her excellence.

“I always consider my accomplishments to be student success,” Mrs. Johnson said. “They pass their boards, get a good job and become a great nurse. It changes their life. I have seen so many success stories in my 28 years and it makes me so proud to have been a part of those.”