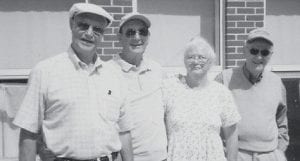 When you listen to Mary Ann Mullins of Jenkins, talk about America and our veterans, you will have no doubt about her sincerity. You can see her eyes get glassy and hear the tremble in her voice as she speaks. She has led a tireless crusade for the past five years to get a suitable memorial for our Jenkins World War II veterans.

“That war nearly wiped out our town,” said Mary Ann. “I have compiled a list of 327 men and women from Jenkins, Burdine and Dunham who served in the war. Our people are so patriotic; we contributed more than our share and most of them were volunteers. They didn’t wait to be drafted. I was just a young girl when they came home from the war and I knew most of them.

“We must provide a lasting tribute to our WW II veterans; they were the greatest generation,” said Mary Ann. “I have been assured that we will get funding from coal severance taxes through Letcher County Fiscal Court to erect a monument. I’ve been in contact with our magistrate, Wayne Fleming, a Vietnam War veteran; County Judge/Executive Jim Ward; and State Representatives Leslie Combs and Ancil ‘Hardrock’ Smith. They have assured me that the funding is approved and will be sent down in January 2008. I’ve already got the stone picked out; it will be black granite with the inscription ‘World War II Veterans Served with Pride.’ It will have the American flag carved on it and the names of all of our Jenkins veterans. I’ve got the spot picked out, too. It will be on Main Street right close to the memorial which honors Lt. Darwin Kyle, a Jenkins soldier who was awarded the Congressional Medal of Honor posthumously for his heroics in the Korean Conflict.” 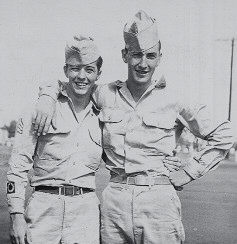 Mary Ann’s husband, the late Carlos Mullins, was a veteran of the Korean Conflict and a member of the Jenkins American Legion Post #66 for 50 years. Mary Ann has been a member of the Ladies’ Auxiliary for as long. Currently, she is the president of the Jenkins unit and president of District 10, which includes Jenkins, Neon, Whitesburg, and Martin. She is also liaison to the Hazard Veterans Center. Last year she raised money to give the residents a nice Christmas. She called the facility to see what the residents needed and learned that the veterans would appreciate blankets. She coordinated the project with various groups and delivered 120 blankets. Some of the veterans there are permanent residents, some are there for indigent care, and some for rehabilitation. The oldest resident there is 95 years old. Two of the residents are women. 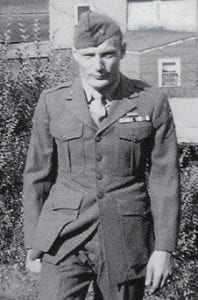 IN UNIFORM – Posing in his uniform is Charles “Slick” Gallion.

Under Mary Ann’s leadership, a $500 scholarship is being awarded to a Jenkins High School graduate. The scholarship is based on need as well as scholarly achievement. American Legion Post #66 and the Ladies’ Auxiliary raise the money and make the presentation based on the recommendation of the school superintendent.

Folks from throughout the state have heard about Mary Ann’s enthusiasm. In June of this year she was invited to the state convention and addressed a group of 5,000 people about her support of our veterans.

Her work at home continues unabated. Recently, Mary Ann helped four widows apply for pensions based on their husbands’ military service. Each woman had severe financial needs and did not know that she was eligible. All four applications were approved.

On a historical note, Mary Ann pointed out that the Jenkins American Legion was the 66th post chartered in the United States. Former Jenkins School Superintendent C.V. Snapp, a veteran of World War I, was the commander for many years and the Rev. J.F. Hale was the post chaplain.

Mary Ann is obsessed with her mission to identify all of the World War II veterans from Jenkins, Dunham and Burdine. She has done research at the library and spent countless hours contacting family members to learn more about our men and women’s service to our country. Of the 322 names she has collected, she knows of only 18 who are still living. She needs your help to update this information.

I recently met with three of our World War II veterans at the Jenkins Senior Citizens Center:

Harold Bryant said he and his buddy, Robert Haynes, graduated from Jenkins High School together and enlisted in the Army soon thereafter. They went through basic training together at Fort McClellan, Ala., and were assigned to the Military Police. Both ended up in Manila, Philippines. They served honorably and were discharged in 1947.

Ray Shortt enlisted in December 1942 and served in the Army Engineers. After receiving specialized training at several stateside bases, he was assigned to Scotland and Oxford, England. He was a heavy equipment operator during the invasion of Omaha Beach, France.

Joe Bukovich enlisted in Middletown, Penn., and served in the Air Force. He was promoted to master sergeant line chief and maintained C-47 troop carriers. He flew 50 missions to the front lines and brought wounded troops back to the hospital. He served in the southwest Pacific and was awarded the Distinguished Flying Cross.

Carl “Jake” Gallion entered the military in March 1943 at age 19. He served two years overseas and was released to come home in 1945 after being wounded at Anzio.

Charles “Slick” Gallion entered the military in 1944. He served 22 months overseas and came home in 1946.

Clarence Dotson entered the military at the age of 18 and served two years overseas. He came home in 1946.

Mary Ann Mullins needs your help in updating this information about our World War II veterans. You may call her at 832-2007 or write to her at Box 48, Burdine, KY 41517.