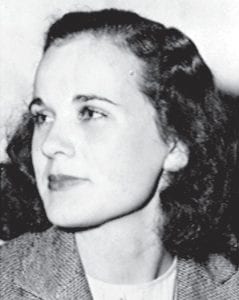 The recent crowning of Little Cowan native Destin Kincer as Miss Kentucky USA has stirred up interest into past beauty pageant contestants from Letcher County who advanced to national competition.

While it was widely believed by many that Carol Brown of Whitesburg was the only woman from Letcher County who had previously competed for a national beauty title (Brown was Miss Kentucky in 1959), Mountain Eagle contributing writer Bennett Welch has discovered that the first national contestant was Madonna Smith of Jenkins, who was crowned Miss Kentucky in 1946, 11 years after the Miss Kentucky Pageant was founded.

The following story appeared in the August 29, 1946 edition of The Eagle.

Miss Madonna Smith of Jenkins was selected for the title of “Miss Kentucky” at the State Fair in Louisville on Monday.

Competing as “Miss Letcher County,” Miss Smith was chosen from about 50 contestants representing various sections of the commonwealth. A crowd estimated at 20,000 witnessed the contest.

The title gives Miss Smith the right to represent the state at the Atlantic City beauty pageant Sept. 2-9.

Miss Smith, who is a graduate of Jenkins High School and plans to enter Agnes Scott this fall, is a lovely brunette with olive skin. She is conscious of her beauty and carries herself with ease when appearing in public. She is the daughter of Mr. and Mrs. Don Smith of Jenkins and is well known in Letcher County’s younger circle.

Mary Madonna, which is her full name, is a striking beauty that attracts attention wherever she appears and has a sweet personality, being at ease with any class of people.

The judges in Louisville say Miss Smith is one in a million who appears on the horizon who are destined to go places in the world and feel that she even has a good chance to win the Miss America title.

Miss Smith was accompanied to Louisville by her mother and Mrs. W.P. Nolan of Whitesburg, her co-sponsor and chaperone.

The following article appeared in the September 12, 1946 edition of The Mountain Eagle:

Madonna and her mother returned on Tuesday of this week from the Atlantic City Beauty Pageant. They reported a wonderful trip and a grand time-Miss Smith won several nice prizes at Atlantic City and ranked 19 with the beauties of the Nation.

Miss Marilyn Bueford of California was awarded the $5,000 scholarship and the title of “Miss America”.