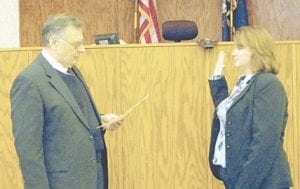 Since January of 2009, Watts has had a private practice in Whitesburg. Prior to moving back to Letcher County, Watts practiced law for four years in London.

Watts was graduated from the University of Louisville Louis D. Brandeis School of Law and Transylvania University, where she majored in psychology.

In 2002, Watts worked as a counselor at the Center for Women and Families in Louisville where she decided to attend law school.

“I thought I would be able to help more in the legal profession than I was able to help women in the shelter,” said Watts.

As assistant commonwealth’s attorney, she will handle some of the domestic violence cases.

She has been married to Josh Watts for 10 years.