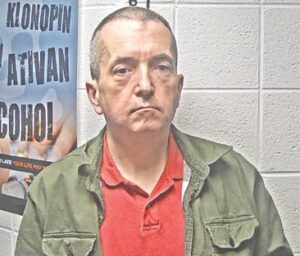 The Letcher County Sheriff ’s Department has charged a Jeremiah man with trafficking in methamphetamine after a traffic stop at Isom.

Sheriff Mickey Stines said Robert Ryan Adams, 46, had 2.4 grams of methamphetamine on his person when a deputy searched him after stopping the car in which he was a passenger on the night before Thanksgiving.

According to the citation, deputies had information that Adams would be riding in a blue, four-door car driven by Rachel Tackett, 30, of McRoberts, and would be taking methamphetamine to sell to someone at the Family Dollar store at Isom.

Deputy James Norris wrote in the citation that he saw a vehicle matching that description with a woman driving and a man in the passenger seat parked at the Dollar Store, and then saw the man, whom he recognized as Ryan Adams, get out of the car and walk inside. He came back to the car a few minutes later, and Norris followed the car until it turned on KY 7 South, where he pulled the car over for having the light out on the license plate.

Norris said he asked for permission to search the car and was denied, but that Tackett wrote out a statement saying Adams had stuffed drugs into his pants when he saw the police. Norris said when he confronted Adams with the statement, he admitted to having the drugs and handed a pink plastic bag containing a substance suspected to be meth to Norris. Norris said Adams also told him he was supposed to meet someone named Shane at the Dollar Store and sell him the meth.

Tackett was charged with traffic violations for her license plate light, having an expired license and not having a license in her possession. Adams was charged with first-degree trafficking in a controlled substance, first offense.

While Tackett was ticketed and let go, Adams was arrested and placed in the Letcher County Jail where he remained Tuesday in lieu of a $10,000 cash bond and home incarceration.

Adams is a former Kentucky State Police dispatcher, a former assignment editor at WYMT-TV News, and a former security guard at Rupp Arena in Lexington.