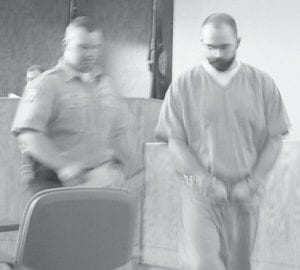 Dustin Adams, right, was led out of the Letcher Circuit Courtroom last week after pleading guilty to robbing the Isom branch of Community Trust Bank. He will be formally sentenced in September, when he is also expected to plead guilty to theft by unlawful taking of property valued at more than $300, trafficking in marijuana less than five pounds (first offense), receiving stolen property, and possession of drug paraphernalia (second offense) in connection with the January robbery.

Sentencing is set for September 9 for a Jeremiah man who has pleaded guilty to robbing a branch bank at Isom.

As part of the agreement, Adams will pay a fine of $2,500 and will forfeit a Hyuandi automobile, an all-terrain vehicle, and a .38- caliber handgun used in the robbery. Eighty-five percent of the proceeds from the sale of the forfeited items will go to the Kentucky State Police, with the remaining 15 percent going to the Letcher Commonwealth’s Attorney’s office. The agreement also calls for a stolen rifle found in Adams’s possession to be returned to its owner by the KSP.

Adams pleaded guilty to walking into Community Trust Bank at Isom at 8 a.m. on January 21 and walking out with $14,500 in cash after he ordered two female employees to open the vault.

Police found marijuana and a rifle previously reported as stolen after Adams gave them permission to search his home at of 2956 Highway 7 South, Jeremiah, after admitting to selling marijuana and robbing the bank.

If Letcher Circuit Judge Sam Wright accepts Adams’s plea in September, Adams will be sentenced to 14 years in prison for first-degree robbery; five years for theft of unlawful taking of property; 10 years for trafficking in marijuana; five years for receiving the stolen rifle, and five years for possession of drug paraphernalia (second offense).

The charges would run concurrently.