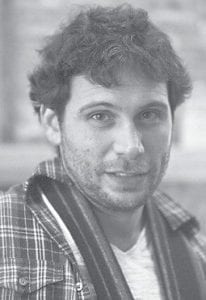 When Jeremy Sisto got his first glimpse of the updated “Law & Order” opening, there he was, in a courthouse setting alongside his castmates, just like so many who had come before him.

Sisto hums a few bars of the “Law & Order” theme, and recalls with a laugh: “There I am, walking with the others. And I thought, ‘What’s HE doing there?!”‘

Maybe it was just time. The 33-year-old actor has already played Jesus and Julius Caesar, a high-school hunk who catches Alicia Silverstone’s eye in “Clueless,” and, recently in “Waitress,” Keri Russell’s loutish husband.

Last season, he tracked down abductees on the short-lived drama “Kidnapped.” And among his most memorable roles: Billy Chenowith, a gifted photographer and tormented manic-depressive on the HBO series “Six Feet Under.”

Bottom line: Sisto and Roache become the 23rd and 24th actors to fill the show’s six slots for cops and prosecutors.

But “Law & Order” begins another season after surviving a near-death experience last May. It was almost canceled, the victim of a sharp ratings drop. Having won a reprieve, it’s now back in the chase to overtake “Gunsmoke” (20 years) as TV’s most-enduring prime-time drama. Two episodes air Wednesday at 9 p.m. on NBC.

“It’s classic ‘Law & Order,’ but it’s been reinvigorated,” says Sisto, munching a cookie at a favorite coffee hangout in his SoHo neighborhood.

The premise: After four years abroad working undercover intel, Detective Lupo is summoned to New York when his brother is found dead. Lupo joins Green to crack the case.

Unlike many of Sisto’s roles, Lupo is a somewhat understated personality. Sisto has a knack for stirring up a thunderstorm in his performances. But not here.

“It’s a different kind of acting, this ‘Law & Order’ thing,” he explains. “They want two partners who can play off each other well and are fun to watch, but depth of character is not necessary in this job. Too much character gets in the way of the story. This is a very specific gig.”

Sisto fell under drama’s spell growing up in Chicago, where his mom, an aspiring actress, brought him along to her auditions.

“Then someone would say, ‘Does your kid want to read for a part?’ I did some plays and had a great time.”

When he was 16, he landed his first film, the drama “Grand Canyon,” playing the teenage son of Kevin Kline and Mary McDonnell.

“That got me a foot in, to come out and have a life in L.A. in this business,” Sisto says. “It could very easily not have happened for me. To be an actor takes a lot of courage, but the way I did it takes less courage.” He laughs. “I was very lucky.”

Since then, he has tackled dozens of roles, roles that often took him to a furious or troubled place. Those are his faves, he says – “the kind of roles where you feel like you’ve expressed something that’s private, and shared sides of yourself that are darker and you’re less proud of.

“It’s nice,” he insists. “It’s like having a good cry. Sometimes you NEED a good cry, you know? And if you happen to cry in front of the world, something about that is cleansing: ‘Here’s me at my ugliest, and my weakest and most vulnerable, and it’s OK – it happens to all of us.’

“I think it’s good to put it out there for the audience,” he says. “We’ve all had moments where we’re sitting at a movie or watching a show, and we see it and feel understood for a moment; we feel a little less alone.

“I’m definitely craving some of that right now,” he adds with a tight smile. “I’d love it if my character Cyrus Lupo had a breakdown. I tried to get ’em to write that: ‘Maybe he could freak out!”‘ Sisto chortles and shakes his head. “It’s not gonna happen!

“‘Law & Order’ is different,” he cheerfully concedes. “For the viewer, it’s that old friend. It brings up moral questions and the legal aspects of them. It’s fun to pretend to be a detective for a little while and go through all the clues. You put it on and you just feel better.”

For 18 years and counting. No freaking out allowed.