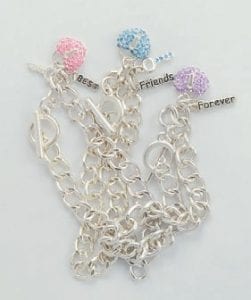 The U.S. Consumer Product Safety Commission has announced the recall of about 19,000 “Best Friends” charm bracelets because of high levels of cadmium., which can harm the kidneys and bones and is a known carcinogen. (AP)

Federal regulators announced another recall of children’s jewelry with high levels of the toxic metal cadmium this week, also saying they’ve expanded their investigation in an effort to keep dangerous items off store shelves in the first place.

A spokesman for the U.S. Consumer Product Safety Commission told The Associated Press its inspectors at 10 of the nation’s largest ports are now screening children’s jewelry — typically imported from China — for cadmium.

“Our surveillance and detection program has now been expanded” through the use of special guns that shoot X-rays into jewelry to estimate how much cadmium each item might contain, spokesman Scott Wolfson said.

Word of increased scrutiny came as the agency announced the voluntary recall of about 19,000 “Best Friends” charm bracelet sets made in China and sold exclusively at the jewelry and accessories store Claire’s, which has more than 3,000 stores in North America and Europe.

Agency scientists confirmed independent test results that were reported by AP in January, which showed high levels of cadmium in the “Best Friends” bracelet.

The recall pertains only to such items previously sold at Claire’s; several days after AP’s initial investigation became public, the chain said it would immediately stop selling the item.

While the CPSC does not release its results, testing done for the AP revealed that bracelets sold at Claire’s contained up to 91 percent cadmium by weight, and shed alarming amounts during a test that examined how much cadmium children might be exposed to if they accidentally swallow the charms.

“Cadmium is toxic if ingested by children and can cause adverse health effects,” the agency said in its recall announcement. Medical research shows that cadmium in high levels is a known carcinogen and can harm kidneys and bones.

Consumers should take away from children the bracelets, which were sold for about $12.