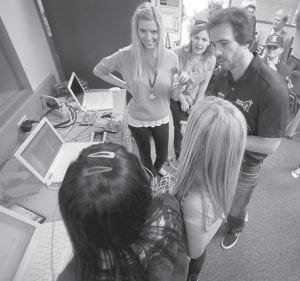 Jimmie Johnson, four-time defending NASCAR Sprint Cup Series champion, and his wife, Chandra, left, listened to students explain their science projects in a laboratory at Emerald Middle School in his hometown of El Cajon, Calif., earlier this month. The laboratory was built with part of the $100,000 Johnson’s foundation gave the school. (AP Photo)

There’s a theory that Jimmie Johnson is to blame for what ails NASCAR.

Falling television ratings are because the fourtime defending Sprint Cup champion kills the suspense by winning all the time. Attendance at races is down because Johnson is boring and lacks the strong personality of colorful drivers from the past.

“Well, I know that I’m not the reason for those things and I sure as hell know I’m not vanilla,” Johnson said.

Johnson made his case before another ho-hum third-place finish on Saturday at Charlotte Motor Speedway. It came as he rallied from being 37th early in the race when he spun out.

“I’m kind of proud that I didn’t hit anything,” Johnson said.

Johnson remained in his familiar spot atop the Chase for the Sprint Cup championship standings. Johnson, who has won the series title since 2006, is 41 points ahead of Denny Hamlin.

“We need more drama in our sport,” Charlotte Motor Speedway owner Bruton Smith said before Saturday’s race. “I was joking it would be great if Jimmie came out of the car and slapped somebody. That would be drama.”

It’s not Johnson’s style, but he insists he’s a lot different from the young driver who started in NASCAR’s lower series.

“I went from being like a C-level driver in Nationwide and through all the other things in my career, to drive for Hendrick Motorsports to having success early,” Johnson said. “At the end of the day I want to be a professional and do my job. And some people formed opinions then and it’s unfortunate that if it still lingers around because I think I’ve done plenty to show that I’m far from vanilla.”

But you’ll rarely see Johnson mix it up on the track, call out drivers or NASCAR officials, or make provocative comments. And his dominance comes as NASCAR is concerned about falling ratings and attendance.

“We don’t know why. And it’s not just our sport, it’s all sports and it’s all television,” Johnson said. “It’s not me and I know that. So I just kind of chuckle about it and if people want to spend time talking about it they can.”

Track owner Bruton Smith believes NASCAR should push start times for Sunday races back an hour to 2 p.m. to better compete against the NFL. “If people want to tune in and watch football — and every game seems to be about the same — by 2 o’clock maybe they’re tired of it and then they’ll come over and watch a real sport,” Smith said.