Jimmie Johnson makes case as one of the all-time greats in racing, sports in general 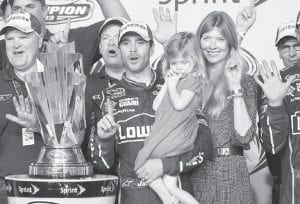 It took Jimmie Johnson just 13 races into his rookie season with Hendrick Motorsports to prove to his team he was a rare talent.

He had just won at Dover for his second victory in four weeks and was debriefing with crew chief Chad Knaus when he brought up a sensation he felt in the car that day that he was certain came from wind blowing through a gap in the grandstands.

It was remarkable insight, Knaus said, from a driver who understands very little about the setup of a racecar.

“When they’re able to get in that position, and they feel the car, understand what the car is going to do, it’s pretty amazing. Jimmie can really do that. He feels what’s going on.”

Knaus went so far as to claim Johnson does things in the car “most mortals can’t.”

His resume supports that claim.

Johnson continued his romp through the NASCAR record books Sunday night by winning his sixth championship in eight years. With only the mark of seven titles won by Richard Petty and the late Dale Earnhardt ahead of him, Johnson is making a solid case to be considered one of the best to ever climb into a racecar.

It’s a debate he wants no part of, shrugging in his champagnesoaked firesuit Sunday night that those conversations can wait until after he’s done racing.

There are some who believe Johnson is a product of his environment, and he wins because he drives for mighty Hendrick Motorsports in a car prepared by Knaus, a crew chief so laser-focused on the No. 48 Chevrolet that it’s not always evident if he finds any joy in his job.

There’s also an argument that Johnson’s titles stem from the Chase for the Sprint Cup championship format, which debuted in 2004 as a 10-race playoff. It replaced the decades-old system of crowning a champion based on an entire season, and Johnson reeled off five consecutive titles beginning with Year 3 of the Chase.

But that’s not his problem. He raced under the rules at the time, on the same playing field as everyone else on the track — the same as Petty did during his heyday, and Earnhardt during his time.

As far as Petty is concerned, the debate is pointless.

“ You can’t compare. It’s not apples and apples. It’s apples and oranges.”

Petty is right, it is very difficult to compare. But Johnson has very much earned the right to be part of the conversation by winning his six titles faster than Petty and Earnhardt, by becoming the youngest driver at 38 to reach the mark, and by winning 30 more races (he has 66 total Cup wins) than any other driver in the last 11 years.

“I don’t think he wants to try to prove it to anybody else, he just wants to prove it to himself,” team owner Rick Hendrick said. “I’ve never seen anyone that works any harder and is any more committed to his physical conditioning, from the way he eats at certain times of the year, when he gets into the Chase, the way he works out.

Yet Johnson still fights a stereotype among many stick-and-ball types who don’t respect what he’s done.

The most recent slight came from retired NFL quarterback Donovan McNabb, who was asked on a Fox Sports program to rank Johnson against other athletes at the top of their game. McNabb dismissed the driver as “absolutely not an athlete” because “he sits in a car and he drives, that doesn’t take being athletic.”

Johnson said very little on the topic, even after winning his championship.

“Yes, I am an athlete, and so is every driver in one of these race cars,” he smiled.

Ironically, Fox Sports rival ESPN had Johnson sit in as host Tuesday night for SportsCenter, an appearance that was touted as “the first athlete to guest host.”

He deserved the nod, as his accomplishments rank as high as any other current athlete.

Derek Jeter and Kobe Bryant have five team championships, which Johnson has now surpassed. He’s tied with Michael Jordan, who for two years has ribbed Johnson that he had one more ring than the driver.

There are only five active tracks on the schedule where Johnson has yet to win, and one of them is Homestead, where he’s traditionally playing it safe and trying to wrap up a championship.

Knaus, who opined Sunday night that if not for midseason rule changes in 2012 the team “would have waxed the competition,” believes the current crew he’s assembled around Johnson has yet to reach its full potential.

Johnson doesn’t dare dream of what other goals he might accomplish or where he’ll rank when it’s all said and done.

“It’s not like me to think in that light. It’s just not me,” Johnson said. “I guess I need to open my mind to it because the numbers speak for themselves. I find myself in a touchy situation at times where my quiet approach can be looked at as arrogant or cocky, and that is the furthest thing from the truth in what I’m trying to portray.

“I’m just trying to say the right things and keep my mind in the right space. I haven’t let a lot in, and it’s led to more success. It’s kept my work ethic intact, kept me honest and humble. I like that about myself. I really, really do. I don’t know if I want to open my mind and let it in, where I stand in the sports world. It’s not time for that in my eyes.”