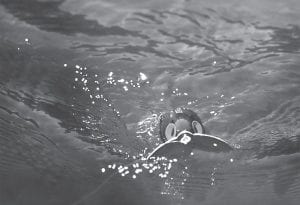 A Jitterbug lure “jitters” across the water. (Photo courtesy Ky. Dept. of Fish and Wildlife Resources)

I bought my first Arbogast Jitterbug at the Western Auto in downtown Bardstown well before my 10th birthday. I had no idea about what made a good color choice, so I bought the one that looked the coolest to me at the time: a model with a silver/gray back and white belly. It was the first lure I ever bought with my own money.

I threw that thing on small lakes and ponds with nary a whiff from a bass. I loved its action and followed the directions on the Jitterbug’s packaging: reel the lure in a few feet, let it sit still, repeat.

A cousin is a Dominican sister, stationed at St. Catherine near Springfield for many years of my youth. This gave me access to fish their small lakes and I attacked with my new lure. No strikes from bass, as usual. Toward the end of the day, I grew frustrated and launched a huge rainbow cast, trying to throw it as far as I could.

A power line running about 1 o’clock over my head grabbed the Jitterbug and I watched in horror as it looped around the cables over and over again. I lost my first lure without it catching a fish. That Jitterbug may still be hanging from those wires. 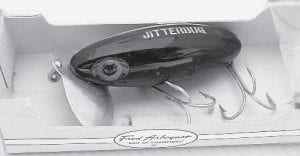 Black has always been the most productive color of Jitterbug while fishing at night, says lure maker Arbogast.

A while later I learned the basics of fishing the Heddon River Runt and the old Knight Tube worms on the many distillery lakes around Bardstown. My brother, Dad and I enjoyed a summer evening fishing on one of those lakes. My brother threw his new black Jitterbug along weed lines just before dark. The commotion from largemouth bass plastering the Jitterbug made Dad and me envious. He caught some good bass that night and lost a big one in the weeds. It was tough to move a big bass from weeds with a Zebco 404 mounted on a whippy fiberglass rod, but my opinion about the Jitterbug changed forever.

The time of day was the difference between my brother’s success with this odd looking lure and my frustration with it. The Jitterbug isn’t a daytime lure; it is the best night bass topwater lure of all time, especially for small lakes and ponds.

Lure inventor Fred Arbogast tinkered in his basement shop with the business end of a spoon and a piece of broom handle back during the Great Depression. The spoon inspired the Jitterbug’s unusual concave lip that produced a highly effective gurgling sound and erratic wobble on the retrieve. No other lure looks or sounds like a Jitterbug since it hit the market in 1937.

Summer nights are the best time to fish Jitterbugs. Black is the only color to throw. It is Jitterbug time when the sun’s fallen so low that you struggle to tie a knot without the help of a flashlight. Tie that last daytime knot to a black Jitterbug.

This lure isn’t a weedless plastic frog you can sling thoughtlessly into the teeth of the vegetation ringing a farm pond or small lake in the darkness. The treble hooks on the Jitterbug impale themselves on any log, lilly pad or strand of coontail they contact.

Study the water before sunset and decide likely casting lanes. Paralleling a weedbed with the Jitterbug draws vicious strikes, but you can catch many huge bass fishing the middle of the pond. The popping, gurgling sound of the Jitterbug draws bass from far away to smash it.

Although the literature promotes a stop-and-go retrieve with the Jitterbug, a straight retrieve often works better. You want the Jitterbug to settle into an annoying rhythm as you work it. The steady irritating sound from the lure drives bass nuts. Hold on to your rod tightly as largemouth bass usually try and savage the lure. The strike is often violent.

The stop-and-go retrieve in which you reel the Jitterbug a few feet, let it rest till the ripples settle out and repeat, works best on nights when the fish aren’t aggressive. Try the steady retrieve first. Move to the stop-and-go if the steady retrieve fails. Resist the temptation to set the hook when you hear the strike or you may have a Jitterbug and its treble hooks flying at your head in the dark. Wait until you feel the weight of the fish before driving the hooks home.

The 3/8-ounce size Jitterbug is a good all-around choice for ponds and small lakes. Cast the lure on a 7-foot medium action spinning rod spooled with 10- to 12-pound test line. Spinning equipment is much easier to deal with at night than baitcasting equipment. Throw the 5/8-ounce Jitterbug if you prefer a baitcasting rod. The slightly longer jointed Jitterbug produces more action and works better on windy nights or in the secluded coves of reservoirs.

The Jitterbug also drives stream smallmouth crazy. Work the ¼-ounce black model at dusk above and below riffles with 45-degree casts. Retrieve the Jitterbug fast enough to keep the gurgle going. The stream current tricks you into thinking you are reeling quickly enough, but often the Jitterbug isn’t making any commotion at all, just bobbing downstream. Speed up if you don’t feel any wobbling through your rod on the retrieve.

Tie on the venerable Jitterbug this summer and enjoy some of the most exciting fishing on the planet. It drove bass insane before World War II and still does today.