Jody Meeks gets 54 in win over UT Vols 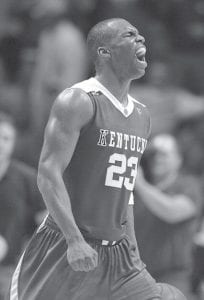 Jodie Meeks scored a school-record 54 points to help Kentucky cruise to a 90-72 win over No. 24 Tennessee on Tuesday night.

Meeks, who broke Dan Issel’s 39-year-old record of 53 points set at Mississippi, was mobbed by his Kentucky teammates in the middle of the Thompson- Boling Arena court, where the Wildcats (13-4, 2-0 SEC) handed the Volunteers their third loss in January.

The Southeastern Conference’ s leading scorer surpassed his previous high of 46 points, which he set Dec. 20 against Appalachian State, with 4:50 left as he hit an open 3, one of 10 3-pointers he would make for the night. He set the record on free throws with 1:31 left.

But the Vols’ spotty defense couldn’t contain Meeks, who hit a layup and two 3-pointers to help the Wildcats on a 10-0 run that gave them a 53-41 lead. Even contested shots sank perfectly through the nets.

Kentucky began stumbling into foul trouble with 9:34 left, and Tennessee — which to that point had shot 35 percent from the freethrow line — sank 11 straight bonus shots to cut the Wildcats’ lead to 71-64 with 6:52 left.

But Meeks, who also went a perfect 14-for-14 from the free-throw line, scored nine straight points to put the game away. No other Kentucky player scored in double figures. Patrick Patterson grabbed 12 rebounds.

Tennessee couldn’t capitalize on several easy opportunities under the basket in the first half, and the Wildcats pushed their lead up to 39-28 with 2:37 left before halftime.

J.P. Prince stole the ball from Kevin Galloway, drove it to the basket and kicked it out to Smith, who sank a 3 with 15 seconds to cut the Wildcats’ lead to 41-37 before the break.