Ask former Kentucky basketball coach Joe Hall who did as much — or maybe more — to help develop UK fan support and he has a quick answer.

“Oscar Combs did more to develop fan support than anybody. He did a service for the University of Kentucky that could not have been bought at any price,” said Hall.

What Combs did was start the Cats’ Pause, a weekly publication devoted to UK sports, in 1976. He had worked for the Hazard Herald from 1965-69 before eventually working for and then buying the Eastern Kentucky Voice. He sold that in 1975 and started the Cats’ Pause in 1976.

Getting Hall on board immediately with the Cats’ Pause was a major bonus for Combs, who had a high of 24,000 weekly subscribers before selling the publication in 1997. 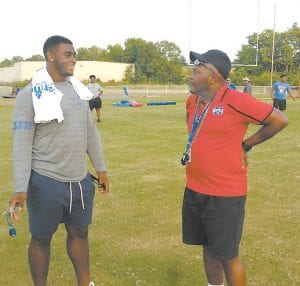 “Oscar should absolutely be in the UK Athletics Hall of Fame,” Hall said. “He satisfied fans by making UK news available all over the country with his publication. He was the spokesman for all UK sports. Everybody waited on their mailman to bring the Cats’ Pause.”

Hall remembers Combs going to then UK athletics director Cliff Hagan and football coach Fran Curci for their thoughts before launching the Cats’ Pause. Hall laughs when he remembers Combs telling him that if Hagan, Curci or Hall thought it was a bad idea, he would not start the publication

“Curci said he had to approve everything he wrote. Hagan said we already have a sports information staff. I said, ‘Oscar it is the best idea I have ever heard. It will satisfy fans like they never dreamed of being satisfied. I think it would be the greatest service you could do,’” Hall said.

It helped Combs that Hall was upset with the UK sports information department at the time and was looking for ways to promote his basketball program.

He cited the time Chuck Verderber, one of his players, was working a summer job using a jackhammer tearing up Lexington streets. He was studying to be a dentist.

“I said what a story. Future UK dentist running a jackhammer on city streets and later being working on the mouths of people of this state with a different kind of drill. They wouldn’t write it up. They said nobody would be interested in the summer in what is going on with basketball,” Hall said.

He remembered another time when he wanted sports information to promote Kevin Grevey for All-American honors. Hall said he often got promotional material from other schools on their star players, but he never saw UK send out anything like that.

“I just asked, ‘What are you doing for Grevey,’” Hall said. “The sports information director said, ‘I don’t believe in paper All-Americans.’ I told him he was in the wrong business. I couldn’t believe it. They wouldn’t do anything. Oscar changed all that stuff with the stories he put out there to tell me about UK basketball and other sports.”

Hall doesn’t vote on UK Athletics Hall of Fame inductees. If he did, Combs would already be a member just like he is in the Kentucky Journalism Hall of Fame.

“I think everybody that knows him would agree that Oscar should be in the Hall of Fame. Now somebody might be jealous of him, but I think he is very deserving for so many reasons,” Hall said.

Former Kentucky quarterback Paul Karem hopes the release of “Black in Blue,” a documentary about the four African-American football players at UK who broke the color barrier in the SEC, will finally help more realize the critical role that Kentucky football played in racial integration in the southern United States.

The documentary will be shown July 28 in a “sneak preview” in Owensboro RiverPark Center. Karem says about 1,000 of the 1,500 available seats have already been sold. The movie will be shown again Aug. 4 in Middlesboro, the hometown of Greg Page — one of the racial pioneers in 1967. Coach Mark Stoops also plans to show the documentary to his team along with a showing at the Speed Art Museum in Louisville for the families of the four African-American players and major donors to the project.

Karem still vividly remembers the game at Mississippi where the Kentucky players were the only African-Americans in the stadium. He remembers times at away games where the black players were refused service for pregame or postgame meals.

“I think the courage these guys had was remarkable,” Karem said. “It’s hard to explain what it was like. Those four guys — Wilbur Hackett, Houston Hogg, Greg Page and Nate Northington — had a deep, deep humility. They never worried about calling attention to themselves for what they did. That’s part of the reason it has been such a long journey to get this story out there but now it is going to be where everybody will see what UK did to integrate SEC athletics.”

Sophomore Josh Paschal figures to be an impact player for Kentucky on the defensive front this season after moving there from linebacker in spring practice.

“When I was some of your ages, about 4, I started playing and always played two years up because I was kind of big. I loved football. My father would work me out and taught me discipline from an early age,” Paschal said. “When I started playing, I played quarterback and it was hard.

“Football taught me if you want to get somewhere, you have to outwork others to get there. You take football seriously but it is also a game and you can have fun. I can be outside and running and as long as I am alive and blessed to be there, I am happy.”

He told them little league and high school football would likely be the best times of their football careers.

“I wish I could come back and play high school football again,” Paschal said. “Just being here, on the field, looking at the lights and smelling the grass reminds me of those times and bonds with teammates. It was great. I am still learning how to play now. It takes forever. You learn and develop every day but just have fun and enjoy your time playing because this is a great time for you.”

Eric Lindsey, Associate Director of Media Relations at Kentucky, has a lot of requests from media almost year round because of his work with Kentucky basketball and coach John Calipari. However, last season he also had a lot more on his mind as his wife, Stephanie, was undergoing cancer treatment at times for adenoid cystic carcinoma.

However, she was also fighting her insurance company after payment was initially denied for the proton therapy her doctor recommended. Because she’s a lawyer, she would not accept the “experimental treatment” excuse the insurance company used to deny her treatment.

“She was diagnosed in December. What she had was slow growing and often goes undetected for a while but we got lucky because she does medical malpractice work and what she had sounded familiar to a case she was dealing with. She went to the doctor, got tests done and they found the cancer. It’s treatable but there is no current cure,” Eric Lindsey said. “The prognosis is good for the first five years and it is typically treated with radiation. The problem is there is a very high recurrence rate with that cancer.”

She had to file an external review with the insurance company after being denied coverage for the needed treatment three times. Eric Lindsey said his wife was one of the “lucky ones” who eventually got approval.

“Thank God it all worked. It was gut wrenching to think about needing the treatment and then having to worry about the money side later,” Eric Lindsey said.

The treatment worked well for her and now she only has to have tests done every six months.

His wife, age 31, hopes her story will inspire others to keep fighting for proton therapy if that is what is recommended. Eric Lindsey is appreciative of the “incredible” support they got.

“Coach Cal was unbelievable through the process,” Eric Lindsey said. “He helped us with transportation. Folks told me not to worry one second about this job. I tried to do my job because keeping busy was a good thing. There were fans I had never met before who helped pull us through.

“It didn’t really hit me what we went through until the season was over and then we got those good reports. I just didn’t have time to think or stress about it because the season was going on and Kentucky basketball is 24/7.

“This all put a lot of things in perspective for me. As great as Kentucky basketball is, it is not the end all. There are more important things in life. Family is what is most important and fortunately for us, she’s a bulldog and now I think she just might have a future in doing advocacy work to help others.”

“There’s nothing better than supporting your kids,” Couch, a former No. 1 pick in the NFL draft, said. “I am blessed to be able to spend so much time with the kids. I want to be there to help them but I don’t want to be that parent who is too involved.

He did plenty first at Leslie County High School and then at Kentucky before going to the NFL.

“I am not that dad who is out there pushing them. It really doesn’t matter to me if they ever play sports,” Couch said. “I just want them to be passionate in whatever they want to do. If that turns out to be sports, fine. If not, that’s fine, too.”

Quote of the Week: “He doesn’t have to take an official visit to Kentucky. It’s just a hop and skip away and Vince Marrow and those guys are always in contact. He looks at Kentucky’s offense and sees what they do with Benny Snell in the wildcat or Lynn Bowden doing the same thing. He could return kicks, play the slot or do the wildcat,” Western Hills coach Don Miller on star player Wandale Robinson.