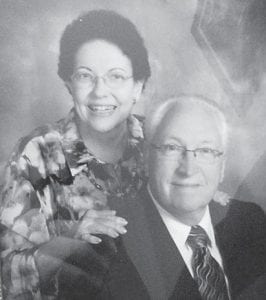 Two of Jenkins’ most respected citizens, John and Rosemary Brown Shook, will be honored on August 23 at the Jenkins Homecoming Festival. The Lifetime Achievement Award is given annually to those individuals who have shown exemplary achievement in their careers, in their community and in their personal lives. This is the first time that husband and wife have been honored at the same time. The presentation will be made in the early afternoon on the stage in the city park after the parade through downtown.

Rosemary Brown Shook was born in August 1941 to Don and Frankie Fleenor Brown. Her mother worked in the Seco hospital where Rosemary was born. Her father came to Jenkins from Johnson County, Tenn., in 1922 and worked as a machinist in Consolidation Coal Company’s Central Shop. As a bachelor he lived with some relatives, the Marshall family, until he married then he was assigned a house in Wheaton Hollow and later relocated to High Street. He worked in the central shop until his retirement in 1971 except for a two-year leave to serve in World War II. 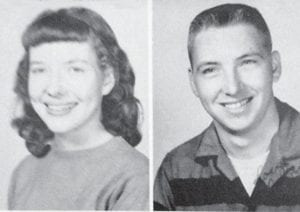 Rosemary and John Shook in their high school photographs.

Rosemary Shook has fond memories of growing up living on High Street with a breathtaking view of downtown Jenkins. Their home was directly behind the Jenkins school where she attended all 12 grades. She recalls that their wonderful neighbors helped all the children feel important and loved. One neighbor, Blythe Dunlap, invited her to attend Sunday School at the First Baptist Church and thus began a love of church that helped shape her life.

She recalls how much she loved the old school. She would go to school early each day when the custodian got there to open the doors and stoke the furnace. She would accompany him to the furnace room and ‘hug the chimney’ to get warm. From her home on High Street she could hear Mr. Lyon’s band practicing and watched them practice marching. She could also see the Cavalier football players leave the school to walk a half-mile to the football field to practice.

When she entered the first grade in 1947, she loved her teacher, Miss Mary Jo Botto, from day one. Rosemary said, “We had kind teachers and principals, precious classmates, Bible ladies from Camp Nathanael and always our superintendent, Mr. Snapp. All of these made me want to become a teacher and come back to Jenkins to teach. The Lord allowed me to do that.”

Mrs. Shook reminisced that the eighth grade was a special year for her because there was a really cute trumpet player among the band and football students who came up from the Burdine School. He was Johnny Shook. They became sweethearts throughout the rest of their tenure at Jenkins School where they graduated in 1959. They attended Morehead State College together and were married in 1960. They have been married 54 years and are parents to their two wonderful sons, Johnny and Don.

Through their careers in education they made several moves to improve their station in life. Their career moves included time in Kentucky, Virginia, North Carolina, Tennessee and Florida. She said that many times a school would hire her just to get her husband as band director. She taught full time in 11 different schools and substituted in some others for 38 years.

She said that she loved her students everywhere but teaching English and science here in Jenkins her last 10 years was a special treat. Her students were kind, smart and fun loving. She bonded with them because she knew many of their parents and grandparents. They also helped with the project to save the old Jenkins School by donating pennies for roof repairs and by working on the “cleanup” days.

Mrs. Shook’s legacy is that she was the driving force to save the old Jenkins School from demolition. She began this initiative in 1992 when she and her husband returned to Jenkins. In May, 1998 Gov. Paul Patton was in Jenkins for dedication of the David A. Zegeer Coal Railroad Museum. In the audience were Rosemary Brown Shook and a group of her supporters (adults and school kids) with a sign that read, “Please save our old school”.

Meanwhile, a group of citizens had formed the Old Jenkins School Committee and raised $30,000 to do some needed repairs and prevent the building from further deterioration. Many workdays were scheduled to clean up the old building. Adults and school kids turned out in force to remove many truckloads of materials from inside the building. Letcher County Fiscal Court had become the owner of the property and was helpful in the project. Many phone calls, letters and meetings with local and state representative showed the determination of the committee. Governor Patton then budgeted $1.5 million of coal severance tax money to begin renovations to the building.

The committee and the Letcher County Fiscal Court worked together to oversee the initial renovations. In 2013 Letcher County Fiscal Court leased the property to AU Associates of Lexington, which spent another $3.5 million to finish the renovations. Today the facility houses 26 modern apartments for low-income senior citizens plus a television studio, a senior citizen facility and a convention hall suitable for hundreds of people. The Old School Committee and the school kids can be very proud of their efforts to save the old school.

Rosemary and John Shook now live in Elizabethton, Tenn., a lovely town near Watauga Lake, close to her cousins and doctors. She said that she praises the Lord always for placing her family in Jenkins so she could grow up here as a part of the comforting mountains and caring people.