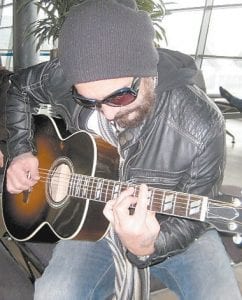 Rock singer and guitarist John Corabi, who is known best for his short but critically acclaimed stint with Motley Crue, will perform an acoustic show in Whitesburg Friday night at Summit City. Admission is $15.

Corabi, a 52-year-old native of Philadelphia, was fronting the Los Angeles-based hard rock band The Scream in 1992 when he was invited to join Motley Crue as a the replacement for celebrity singer Vince Neil. Corabi appears on the 1994 album Motley Crue and received much critical praise for helping the band make an albeit temporary move from pop-metal music to the harder grunge sound that was so popular at the time.

“ The rest of Motley Crue weren’t wrong when they thought the departure of Vince Neil could actually work to their advantage,” said a review of Motley Crue on the iTunes music service. “New vocalist John Corabi brought a bluesy edge to the group, and the popularity of grunge and heavy metal gave the band a new sense of purpose apart from hair metal. Pound for pound, Motley Crue features the group’s heaviest, most intense playing.”

“Corabi keeps it fresh,” said Rolling Stone magazine’s review of Motley Crue, the band’s seventh album, in April 1994. “He has an impressive high-range yowl that’s never nasal, and he bellows his heart out …”

In addition to The Scream and Motley Crue, Corabi has also performed with the bands Angora, Union, ESP, and Brides of Destruction. He played guitar for the hard rock band RATT for their summer 2007 reunion tour. Corabi began performing solo acoustic shows last year when he was invited to go on the road as an opening act for a club tour by the hard rock band Cinderella. His concerts feature the songs “Hooligan’s Holiday,” “ Hammered,” and “ Driftaway” from the Motley Crue album as well as the Motley Crue concert staple “Home Sweet Home.” Corabi also performs songs he sang with The Scream (“Father, Mother, Son” and “Man in the Moon”) and with Union (“Love”).

Among the highlights of Corabi’s acoustic show is his cover of the early Aerosmith tune “Seasons of Wither” and a jaw-dropping version of the Beatles’ “Oh! Darling,” both of which can be viewed and heard on YouTube.

Among the critics who have been impressed with Corabi’s latest work is Roger Scales, who praised him last August in a review for the They Will Rock You Music Network.

“John Corabi has to be the most unlucky yet talented musician I’ve ever seen who still gets it and just plays because he loves it,” Scales wrote after a show in New Hampshire. “ The Scream should have been bigger, but he bolted for the Motley Crue gig ( and who could blame him). The Motley album he recorded (as good as it was) should have been called something else other than Motley Crue, because the fans didn’t fully accept it and only waited for the return of Vince Neil. The Union records also came out at a time when the music scene was shifting again and didn’t do as well as they should have. He then tours with RATT, but they never hit the studio and we will never know what he could have added in terms of song writing or vocals with that line up. But forgetting all that, tonight John gave us a little bit of everything from his past in a 30 minute set that included a Union song, two songs from The Scream, a few Motley staples a Beatles cover along with a brand new song ‘If I Ever Said Goodbye,’ which will be appearing on an acoustic record John plans to release sometime soon. His set was moving, heartfelt and very uplifting.”

In a Sunday night interview with WMMT-FM’s Greg Napier, Corabi, who now lives in Nashville, said he is a fan of many different styles of music and attributes his wide range of taste to his late mother who belonged to a record club for many years and bought releases ranging from the Beatles to Glen Campbell to Johnny Cash to Harry Nilsson.

“Her record collection was so eclectic,” Corabi said. “She even liked my KISS records.”