Will be first trip here by major presidential hopeful since RFK 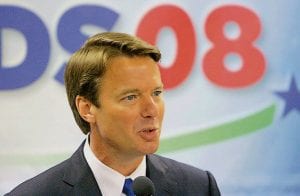 TO VISIT HERE – Democratic presidential candidate John Edwards will visit Whitesburg on July 18. He will also make stops in the towns of Wise and Norton in Virginia, and in Prestonsburg. (AP Photo)

Letcher County is scheduled to receive a visit from a major presidential candidate for the first time in nearly 40 years.

John Edwards announced this week that he will bring his Democratic presidential campaign to Whitesburg next Wednesday (July 18) as part of his “Road to One America Tour.”

It will mark the first time a top candidate has visited the county since the then as-yet-unannounced candidate Robert F. Kennedy was here in February 1968, just four months before he was assassinated by Sirhan Sirhan after being declared the winner of the California primary.

The Edwards for President campaign announced on Monday that it will take a break from its normal schedule of events and hit the road for three days through eight states and 12 towns and cities in order to bring attention to the 37 million Americans living in poverty.

The tour begins on Monday and will end on Wednesday with stops in Whitesburg, Prestonsburg, Norton, Va., and Wise, Va. The campaign is hailing Edwards’s day in Appalachia as “Restoring Hope to Rural America.” 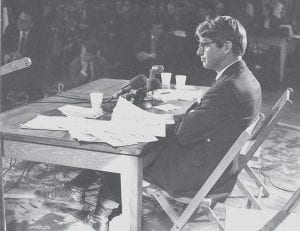 THE LATE ROBERT F. KENNEDY, pictured above during his visit to Fleming-Neon in 1968, is the last major presidential candidate to visit Letcher County during an active campaign year. Former North Carolina Senator John Edwards is scheduled to be in Whitesburg next week. (Photo by Tom Bethell)

“Every day, one in eight Americans wakes up to poverty,” said Edwards. “That’s not okay. Today, we have two Americas in our country – one America that has everything it needs and another that is struggling to get by. Our next president needs not only to understand the struggles facing the 37 million Americans living in poverty, but also have a plan to lift them up out of poverty. That is what this tour and my campaign are about – giving one America, where every person has the opportunity to work hard and get ahead.”

The three-day swing on his “Road to One America” tour will also take him through New Orleans, Memphis, Cleveland, Pittsburgh and four other towns. The tour also includes a stop in Marks, Mississippi, where the Rev. Dr. Martin Luther King Jr. launched his 1968 Poor People’s March to Washington, D.C. Along the way, Edwards will meet with residents devastated and displaced by Hurricane Katrina and with people who have experienced persistent poverty in the Deep South and the Mississippi Delta.

Edwards has made ending poverty in America a pillar of his campaign and laid out a plan to do so within 30 years. He has also outlined detailed plans to lift up working families by guaranteeing quality, affordable health care for every person in America, rewarding work by raising the minimum wage to $9.50 by 2012, protecting workers’ right to organize and making college more affordable.

The former North Carolina senator said the makeup of the poor has changed in the past 40 years to include a wide range of ages and a variety of ethnic and regional backgrounds.

“Many are hardworking men and women with full-time jobs who are still struggling to make ends meet. And their numbers are growing,” he said.

Edwards also plans to visit towns hit by the loss of manufacturing jobs and cities with suburban poverty, such as Youngstown, Ohio, where he will be on July 17.

He is not to first to go on such a tour.

President Lyndon Johnson declared the war on poverty in 1964 from eastern Kentucky, the same territory that would draw Robert Kennedy for a two-day caravan tour in 1968 a month before announcing he would run for president.

In 2005, Edwards helped create the Center on Poverty, Work and Opportunity at the University of North Carolina law school.