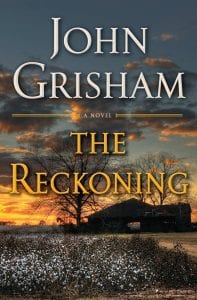 This cover image released by Doubleday shows “The Reckoning,” a novel by John Grisham.

“The Reckoning” (Doubleday), by John Grisham

Author John Grisham takes readers on a journey to the Deep South in 1946 in “The Reckoning.” The main character, Pete Banning, was a prisoner of war in World War II. He was presumed dead at one point, so when he came home, the entire town celebrated. That makes it all the more shocking when he heads to his church one morning and kills the Rev. Dexter Bell. He does nothing to hide the murder, so it isn’t a surprise when he’s arrested.

Banning’s defense attorney demands answers as to why he shot Bell, but he refuses to talk. He doesn’t want to plead insanity, and he replies to every question with, “I have nothing to say.” His family has no idea what happened to prompt such drastic action, but he won’t even talk to his wife and children. There’s a suspicion that Bell might have been a little too friendly to Banning’s wife while Pete was overseas.

The quest for justice is only the beginning in this Southernfamily saga. Readers expecting Grisham’s usual themes of justice and corrupt lawyers won’t be disappointed, but he does so much more this time around. Grisham takes a snapshot of a chaotic time and showcases the world of law and the lack of equality for everyone and wraps it in a family-saga package.