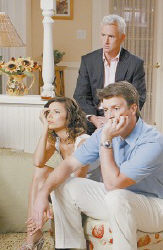 DOUBLE DUTY – At left, Eva Longoria, John Slattery and Nathan Fillion in an episode of ABC’s “Desperate Housewives.” The photo at right shows Slattery, left, and Jon Hamm advertising executives walking to their offices in an episode of the AMC dramatic series “Mad Men.” (AP Photos)

Maybe not. But whatever his costume, Slattery manifests a remarkable range. His lean, vulpine good looks, crowned by that prematurely snowy head of hair, can convey rectitude, menace, arrogance, vulnerability.

An actor clearly in demand, Slattery, 45, has stayed busy for more than two decades in theater and in films (including “City Hall,” “Mona Lisa Smile,” “Traffic,” “Flags of Our Fathers” and the forthcoming “Charlie Wilson’s War”). His past TV series have included “Homefront,” “Feds,” “Jack & Bobby” and “K Street,” as well as recurring roles on “Judging Amy” and “Ed.”

This isn’t to say he’s a household name, or that, even on the streets of Manhattan, where he lives, people typically recognize him as a star. 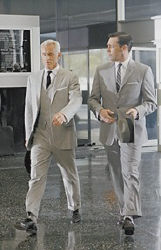 “They think I went to high school with them,” Slattery says, “which is just about the perfect level of celebrity for me. Being on ‘Desperate Housewives’ has kind of bumped it up a little, and I’m not sure how much I like that.”

On the hit ABC soap, which premiered Sept. 30, Slattery resumes his role as the calculating Victor Lang, who, having caught Gabby (Eva Longoria) on the rebound from her marriage to Carlos, has less-than-romantic plans for his attractive bride. He figures she can fetch him the Latino vote in his impending run for governor.

On “Mad Men” (which airs on AMC), Slattery plays a different game. He’s Roger Sterling, the cool, sardonic boss of a Manhattan ad agency in 1960.

A gin-soaked product of that bygone era, Sterling is a charmer, a manipulator, a skirt-chaser, but also, intermittently, a family man who’s apt to toss off a wistful crack like: “One minute you’re drinking in a bar and they come and tell you your kid’s been born. Next thing you know, they’re heading off to college.”

The pilot for the series (which premiered in July) was shot more than a year ago. Then, not long afterward, Slattery got asked to join “Housewives” for a story arc to begin in early 2007.

“I confess to not watching the show regularly before. But when I called friends, they were like, ‘Are you crazy? You gotta do it!’ And I’m glad I did!”

“On ‘Desperate Housewives,’ I’m sort of a hired hand,” he notes, “and for a finite amount of time. That show was wildly successful before, and will continue to be after I’m gone.”

With “Mad Men,” though, Slattery is a charter member. He’s a key ingredient in this drama of modern society as viewed through the prism of a modern society unfolding nearly 50 years ago. (Happily for him along with “Mad Men” devotees, AMC last week announced the series’ renewal for a second season.)

“It’s great being on something like this from the start,” says Slattery, and, invoking series creator Matthew Weiner, adds, “It’s some of the best stuff I’ve ever gotten to do – just as he said it would be.”

The Sterling character is a rich mix, full of contradictions and deceptions and surprises. And that means welcome surprises for the man who plays him, which hasn’t always been Slattery’s luck doing series TV.

“Television can be a scary thing,” he says. “You open the script week to week, and sometimes you go: ‘Oh, NO! Really?!’

“Good writing doesn’t come along so much.”

On one of his previous series, there was no writing at all. “K Street” was an HBO drama hatched by George Clooney and Steven Soderbergh, a politically based mash-up of truth and fiction that threw actors (including Slattery as a Washington lobbyist) with real-life Beltway insiders for each on-the-fly episode.

“Nothing was ever written down,” says Slattery, still marveling four years later. “It was really exciting. But I got shingles, I was so nervous.”

No wonder. A veteran actor with plenty of credits, he had never done improv before.