John Wall looks to enjoy every minute of season 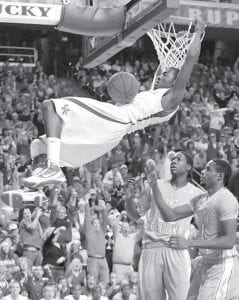 John Wall doesn’t know how long he’s going to be at Kentucky.

The freshman point guard says he’s taking 15 credit hours during the spring semester, but isn’t sure whether he’ll enroll in classes or the NBA next fall.

His time might be short, so why not dream big? Why settle for a national championship when there’s a chance to aim for perfection?

It’s one the third-ranked Wildcats moved closer to with a physical 71-62 win over Louisville on Saturday that helped Kentucky (15-0) match its best start in 40 years.

Wall was his usual brilliant self against the Cardinals, scoring 14 of his 17 points in the second half as the Wildcats finished their nonconference schedule unscathed by outlasting their archrivals over 40 contentious minutes.

Kentucky wasn’t perfect — making 2 of 14 3-pointers, getting outrebounded by the smaller Cardinals and letting an early 13- point lead slip away. But the Wildcats survived behind Wall, freshman center DeMarcus Cousins and forward Patrick Patterson.

That’s the way it’s been all year.

Though coach John Calipari has done his best to temper his precocious team’s accomplishments — he says the Wildcats are “about 9-6” by his standards — he knows his mind games go only so far.

“I’ve got a competitive group,” he said.

One that may have the best chance of the four remaining undefeated teams of becoming the first team since Indiana in 1976 to win an NCAA title while keeping the loss column spotless.

Kentucky has only three games the rest of the season against teams ranked in this week’s Top 25.

The Wildcats host No. 14 Mississippi on Feb. 2, and it’s unclear what shape reeling 16th-ranked Tennessee will be in when the Volunteers visit Rupp Arena on Feb. 13. Four Tennessee players were suspended indefinitely last week after their arrests on drug and gun charges.

No. 1 Kansas and No. 2 Texas have five games remaining against teams in this week’s Top 25, including a showdown with each other Feb. 8. No. 4 Purdue has road games at No. 10 Michigan State and No. 17 Wisconsin.

The Wildcats, meanwhile, most likely will be favored in each of their 16 Southeastern Conference games. The biggest roadblocks could come at Florida next week or at Mississippi State on Feb. 16.

“Kentucky just looks like an awesome team,” Tennessee coach Bruce Pearl said. “They’re fun to watch. They’re getting better. They’ve got all the weapons required to be a dominant team.”

Calipari is loath to put his team in that category. Yet.

“The way I’ve always coaches is day-to-day,” he said. “I’m just trying to keep guys in the moment. We’ve got to rip out the rearview mirror, have amnesia and move on.”

The Wildcats have a week off to prepare for their SEC-opener against Georgia on Saturday. Good thing, they may need the time to cool down following their emotional win over Louisville, a game that looked more like a cage match at times.

The teams combined for 51 fouls — including five technicals — and a narrowly avoided a brawl after Cousins and Louisville’s Jared Swopshire came to blows while fighting for a loose ball 45 seconds into the first half.

Swopshire appeared to knee Cousins after they got tangled up, and the volatile center responded by swinging his right forearm at Swopshire’s head.

Cousins received a technical but stayed in the game and finished with 18 points and 18 rebounds. Calipari defended Cousins on Monday, holding Swopshire equally responsible.

“It was just a scrum,” Calipari said. “(Cousins) got kneed in the head and he was going down.”

Even Calipari got caught up in the moment. TV cameras appeared to catch him talking to Louisville’s Reginald Delk after Delk and Kentucky guard Eric Bledsoe exchanged pleasantries shortly after tipoff.

“I don’t know,” Calipari said. “The game was so emotional … it was a battle.”

One the Wildcats survived with their perfect record intact, just like they did after Miami (Ohio) poured in 18 3-pointers, after Stanford took them to overtime, after North Carolina nearly erased a 19-point deficit.

Calipari says his team still has a lot to learn. Bledsoe and Wall still turn the ball over too much. The outside shooting is inconsistent. Cousins’s maturity remains an issue.

Then again, Calipari knows the lessons are easier to teach when winning.

It’s worked so far. Will it be enough to run the table? Maybe not. That doesn’t mean it can’t happen.

“They’re going to get a lot better,” Louisville coach Rick Pitino said. “I wouldn’t want to play them come February.”