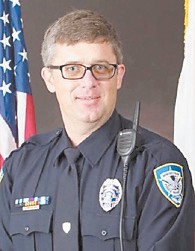 Born in Whitesburg to James L. Reynolds and the late Wanda Rogers Reynolds, he was graduated from Whitesburg High School and Eastern Kentucky University where he majored in Police Administration.

He was a U.S. Army veteran, and had a career as a police officer.

He was retired in 2019 as a Master Police Officer and had worked in patrol, as a detective, and most recently, a school resource officer.

He will be buried in a private ceremony at the Hall Cemetery in Ermine.