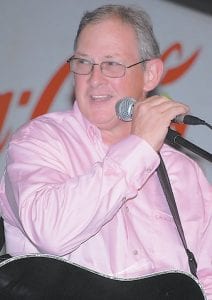 Former Jenkins resident Chuck Johnson has announced that this will be his last year as emcee of the Jenkins Homecoming Festival entertainment thus ending a 10-year tenure of one of the most successful festivals in the mountains.

When the festival was reorganized 10 years ago, Johnson approached Mayor Charlie Dixon and asked if there was any way he could help. The rest is history. From the beginning Johnson became an integral part of the festival in many ways. He learned right away that his responsibility was much more than that of emcee. He was also the stage manager responsible for keeping all of the 20 hours of entertainment on schedule.

Johnson and his family and friends have performed many times at the festival and were always a crowd favorite. On one occasion one of the scheduled acts cancelled with less than 24 hours advanced notice. Chuck was able to put together a band and performed admirably with very little time to rehearse. On several occasions when there was a gap between acts he picked up his guitar or sound tracks to entertain a very appreciative audience. On other occasions in midday when there was no scheduled entertainment Johnson took his portable microphone and like a roving reporter went into the crowd to chat with vendors, visitors, committee people and old friends.

A lot of responsibility was heaped on him and he took on even more. Several of the higher profile acts have been booked by Johnson including Earl Thomas Conley, T. Graham Brown and Exile.

Johnson became interested in music because of the influence of his father Reverend Ezra Johnson who was a Baptist preacher. His dad taught all seven kids to play guitar or mandolin. Chuck was singing in church at about age 5, thus his first love was gospel music.

Later in life he branched out to include country music. His first performance outside the church was at the Jenkins theatre in the 1960s when the Renfro Valley show came to Jenkins. The theatre owner Andy Roberts told Old Joe Clark that Chuck sang. Old Joe Clark said, “Put him on the show.” Little did he know that some 20 years later he would be working with old Joe Clark again at the Renfro Valley Barn Dance where he became known as the popular Singing Coal Miner.

Johnson worked at various coal mining jobs from 1974 to 1991, then gave up coal mining and moved to central Kentucky to work for Toyota Motor in Georgetown. He retired in 2014. In 1991, Chuck was given an award for “Best All- Around Entertainer” by the Renfro Valley Committee.

Being a member of Renfro Valley opened the doors for Chuck in Nashville where he performed twice on Ernest Tubb’s Midnight Jamboree which was broadcast live from the Ernest Tubb Record Shop immediately after the Grand Ole Opry went off the air.

Through the years Johnson has recorded several CDs, all gospel. In the mid-1970s he approached the owner of WREM radio in Jenkins about doing a Sunday morning gospel music show. The owner agreed only if Chuck would host the program because he knew Chuck knew all of the gospel singers. The program was very popular because prior to this time much of the Sunday broadcasts were preaching.

Through the years Chuck has done many live shows with his brother George, his daughter Carmen, his son Charlie and several of his family and friends. A few years ago he did a very fitting tribute to the coal miners dressed in a coal miner’s hardhat, cap lamp and ‘possum light. The show was well received and performed at various venues throughout Letcher County.

In the early 1980s, Johnson had a small part in the movie, “Coal Miner’s Daughter,” much of which was filmed here in Letcher County. Tommy Lee Jones, who played the part of Loretta Lynn’s husband, Doolittle, offered Chuck a bigger part in the film if he could make himself available but as Chuck related, “I had already missed two days of work and could not afford to miss any more.”

This might be Johnson’s final year as emcee of the Jenkins Homecoming Festival but certainly not his final visit to his hometown. Chuck says he always tells people that “I live for this weekend; I mean that with all my heart. I always love coming back home and being with my people. I love the mountains and visiting with my family, old friends, neighbors and former coworkers.”

The festival organizers and the people of Jenkins will miss his presence on the stage but we know he will still be back home each year as a visitor.

On Saturday night, August 27, Chuck will perform with the band Switch Back featuring his son Charlie, lead guitarist, Matt Skaggs, drummer and Bud McKinley, bassist, when they open for festival headliners, The Drifters.