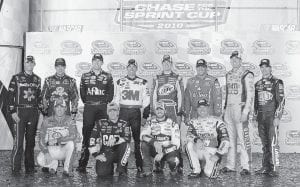 This is the time of season when Jimmie Johnson thrives, and his Hendrick Motorsports team smooths out any chinks in its seemingly indestructible armor.

And with five wins this season and the second seed in the Chase for the Sprint Cup championship, it’s not as though there have been too many bumps in the road.

Then why is the four-time defending champion an afterthought as NASCAR prepares for Sunday’s Chase opener at New Hampshire? Any talk that should be centered on Johnson’s bid for a fifth consecutive title seems to be secondary to the speculation as to who will be the driver to finally end his reign.

Even his fellow competitors are wondering if this is the year Johnson will be beaten.

“Superman has not lost his cape, but it’s shorter than it was in years past,” said Clint Bowyer, who just earned his Chase berth Saturday night at Richmond. “Hopefully we’ll all be able to give him a run for his money this year.”

The overruling thought has always been that the championship is Johnson’s to lose, and he’s done very little to give any indication that he won’t make a realistic run at becoming the only active driver with five titles. He’s crossed winning at Bristol and winning on a road-course off his to-do list this season, and despite an uncharacteristic four DNFs this year — two of them came in a three-race span — he still knocked down 14 top-10 finishes through 26 races.

He went bumper-to-bumper with Kevin Harvick, who built an impressive points lead during the “regular season,” and was tied with Denny Hamlin for the top seed in the Chase until Hamlin surged ahead with his series-best sixth win of the year Saturday night at Richmond.

What did Johnson do? He grabbed his second straight thirdplace finish to roll into New Hampshire running very well.

Yet he still can’t shake the perception that he’s vulnerable this season.

“People can draw conclusions however they want, and I’ve never been one to play into any of that stuff ,” Johnson said.

He learned that lesson in 2005, when he went battled Tony Stewart for the championship. He was mathematically in contention to win in the season finale at Homestead, but a blown tire knocked him out of the race, ending his title hopes with a thud after a tense 10 weeks that nearly destroyed his working relationship with crew chief Chad Knaus.

In the years since, Johnson has focused only on his program and doing what he needs to do on the track. By letting it play out that way, Johnson has collected the last four titles.

“If guys think we are vulnerable, it’s my job to show up at Loudon, qualify on the pole and win the race,” he said. “I’m not concerned about what people think of my race team and where I’m at and what kind of threat we are for the championship. I’m just more concerned about going out and getting the damn job done.

“With two good runs going into the Chase, my guys are ready, I’m ready. We have got our mojo back.”

That confidence should send shivers through the garage, but it so far has not.

Instead, the challengers are headed into the Chase with their own game plans, and knocking off Johnson is the top priority. For the first time in a long time, there’s a slew of drivers that could potentially dethrone him.

First up is Hamlin, who notoriously wrecked while leading at California last season when he saw Johnson in his rearview mirror. He’s made strides since then to toughen up, and if reliability doesn’t become an issue, Hamlin has shown he can compete with Johnson.

Harvick has given Johnson pause this season, as well. With all of Richard Childress Racing running much improved, Harvick grabbed three wins and showed the consistency and confidence needed to take command of the points standings.

The re-seed following Richmond dropped him to third in the standings, 30 points behind Hamlin and 20 behind Johnson, but he likes his chances and has adopted Johnson’s attitude of a singular focus on only his race team.

“The guy that’s been on the top of my mind this year is (Harvick), doesn’t matter the track, they have been quick,” Johnson said. “Harvick has been the surprise this year, and maybe I took for granted how well Denny ran last year and (assumed) he would just be there.

“That’s been the reality to me, that he’s going to be one of the guys to race for it.”

Johnson should be challenged from within Hendrick Motorsports by teammate Jeff Gordon, who although winless this year, was consistent enough to hold down the second spot in the standings for most of the season. He dropped 60 points behind Hamlin at the re-seed.

So did Carl Edwards, who has gotten very hot of late and famously won three of the final four races in 2008 to give Johnson a run for his money.

In a sense, the idea that Johnson is vulnerable has more to do with how far the competitors have come than it does with any flaws in Johnson’s program. Guys are tired of watching him collect the hardware each November, and they’ve adjusted accordingly by staring down the target Johnson has on his back.

As always, he plans to just do his own thing.

“It’s been awfully tough to win four in a row, but we’ll show up and give 100 percent and at the end of the 10 races, if we give 100 percent and get beat, then we’ll go home and be proud of what we did,” he said. “But if we squandered it away and do something stupid and say, ‘We just didn’t give it our all,’ we’ll be disappointed. We just want to do our best.”