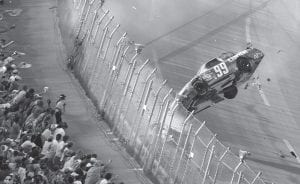 Carl Edwards’s car hit the safety fence during a crash on the last lap of the Aaron’s 499 NASCAR auto race at Talladega Superspeedway. (AP Photo)

Three-time defending NASCAR champion Jimmie Johnson believes the only way to control the racing at Talladega Superspeedway is through a radical transformation of the race track.

The racing at the 2.66-mile Alabama superspeedway is again under scrutiny after Carl Edwards’ airborne crash into the safety fence on the last lap of Sunday’s race. It was the most frightening of three accidents, including a 10-car pileup that knocked Johnson out of the race with nine laps to go.

Because the track is so big and wide that drivers never have to lift off the gas, Johnson said Tuesday that NASCAR cannot remove the horsepower-sapping restrictor plates that are used to combat the high speeds at Daytona and Talladega. That leaves a track alteration as his only suggestion.

“I don’t know how we fix it unless we take a bunch of tractors out there and knock down the walls, knock down the banking, and make the track where you have to let off (the gas),” Johnson said. “Outside of that, I don’t think there is a rule that NASCAR can come up with. As long as we’re running (restrictor) plates, we’re going to have this issue.” 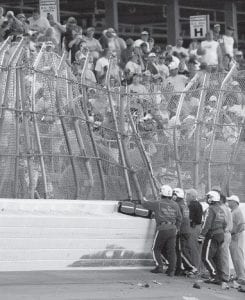 NASCAR officals looked at the damage to the fence after Carl Edwards’s car hit it during a crash on the last lap of the Aaron’s 499 Sprint Cup auto race at Talladega Speedway on Sunday. (AP Photo)

NASCAR officials said changing the track is not an option.

“The most exciting races that we have today are both at Daytona and Talladega,” said Sprint Cup Series director John Darby. “I think there’s more value in continuing the (safety) efforts … than turning those two very historical, very exciting race tracks into flat parking lots.”

Most fans consider the four plate races a year to be the most exciting events of the season. Because the cars all run at about the same speed, drivers are unable to pull away from each other. It creates huge packs of traffic and one wrong move by one driver can wipe out dozens of cars in spectacular accidents.

Sunday’s race lived up to the hype, with 57 lead changes among 25 drivers. Edwards and Brad Keselowski ran down leaders Ryan Newman and Dale Earnhardt Jr. on the last lap, and as they neared the finish line, Edwards wrecked while trying to block Keselowski’s winning pass.

Contact between the two cars sent Edwards spinning into Newman’s path, and the second hit from Newman sent Edwards’ car sailing into the frontstretch safety fence. The fence buckled, but snapped back and Edwards’ battered car returned to the track.

Edwards was unhurt, but debris from the accident injured seven fans in the stands. One woman remained hospitalized Tuesday in fair condition with a broken jaw.

NASCAR vowed this week to toughen its policing on aggressive driving and blocking, which often leads to the multi-car accidents. Officials issue consistent pre-race warnings to drivers but have been rare to levy in-race penalties.

Johnson believes in-race penalties will open NASCAR up to harsh criticism over “judgment calls” and he doubts the drivers can be deterred, anyway.

“All of them can talk until they are blue in their face … but when we get in those cars, we are going to race and try to get the positions,” he said. “That’s what we do.”