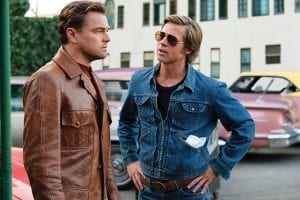 Leonardo DiCaprio, left, and Brad Pitt appear in a scene from “Once Upon a Time in Hollywood.” The film is nominated for an Academy Award for best picture, while DiCaprio and Pitt are nominated for best actor and best supporting actor. (Sony via AP)

Female filmmakers were shut out, “Parasite” made history and “Joker” edged out “The Irishman,” “1917” and “Once Upon a Time … in Hollywood” in this week’s Oscar nominations.

“Joker,” which gives the DC Comics villain an anti-hero spin cribbed from Scorsese, was expected to do well. But the academy’s overwhelming support for a divisive movie that was far from a critical favorite was unexpected. The film’s nominations included best actor for Joaquin Phoenix and best director for Phillips.

Though a record 62 women (or about a third of nominees) were nominated this week, the Academy of Motion Pictures Arts and Sciences put the most weight behind a handful of swaggering male-driven and man-made movies predicated on virtuosity, spectacle and star power. For the 87th time, the academy selected all-male directing nominees.

Hollywood, in the midst of a streaming upheaval, also gave Netflix more nominations, 24, than ever before. The 10 nominations for “The Irishman” tied the most for a Netflix film, following “Roma” last year. Scorsese, a onetime winner for “The Departed,” was nominated for best director for the ninth time. The film also won nods for Al Pacino, Joe Pesci and its de-aging special effects. “We put all of ourselves into this picture,” said Scorsese in a statement.

“1917” followed up its Golden Globes win and strong opening weekend at the box office with nominations not just for its technical achievement (including Mendes’ directing and Roger Deakins’ cinematography) but for best screenplay, too.

“Once Upon a Time … in Hollywood” was nominated in just about every category it was expected to, including Tarantino for directing and screenplay, best actor for Leonardo DiCaprio and best supporting actor for Brad Pitt. And Hollywood loves little more than a good story about itself.

“It’s a real love story to this industry,” DiCaprio said by phone. “In this movie, Quentin got to do a movie that was a homage to Los Angeles and a place that I grew up in.”

Despite a year in which women made historic gains behind the camera, female directors were again shut out of best director. The most likely candidate was Greta Gerwig (“Little Women”), who was the last woman nominated, two years ago for “Lady Bird.”

Jennifer Lopez, long considered a supporting actress front-runner for her performance in “Hustlers,” was also denied her first Oscar nomination.

The oversights left the Oscars with their least diverse field since the fallout of #OscarsSoWhite pushed the film academy to diversify its membership. The only actor of color nominated was Cynthia Erivo, the British actress, for her Harriet Tubman in “Harriet.” Last week, the British film academy nominated only white performers, leading Erivo to decline an invitation to perform.