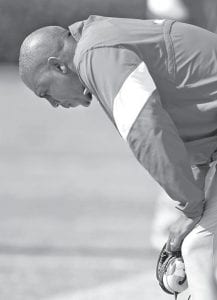 Given the history of bad coaching hires at the University of Kentucky, head football coach Joker Phillips has no reason to hang his head. (AP)

As I continue my quest to see that Joker Phillips gets a fair chance to pull himself out of this two-year funk he has helped bring on to UK football I had another one of those famous Combs brothers brainstorms while sitting around the patio with some friends cooking out last weekend.

Several of those in attendance suggested I write a column on the worst hires ever in the UK athletic department. At first I thought “not a bad idea” and then that ugly tireless topic that I’ve grown to hate came up — research. While it requires tireless long hours, research is necessary even when extremely boring. Then it hit me that I’m dangerously close to the tender age of 60, so I’ve witnessed with my own eyes a lot of bad teams caused by decisions made by UK athletics directors and head coaches.

So here is my list. At the end I want you to think back and ask yourself this question: At 6-6 with a win against Steve Superior at South Carolina and a minor bowl bid, and a 5-7 mark with a win against Tennessee, just how bad was the last two years of UK football compared to where the program has been in some years during the past 60 years?

My 5 worst coaching hires, fires , etc. (both football and basketball) of the last 60 years in the UK athletic department and the individual responsible for the hire:

No. 5 — John Ray, UK head football coach (1969-72). Hired by Athletics Director Harry Lancaster, Ray was brought to UK from the fertile grounds of Notre Dame, where he was a defensive coordinator. He fielded some of the most inept teams (especially offensively) in the UK’s gridiron history. Ray did convince the UK administration that if UK was to ever have a fighting chance in the SEC that it had to build a new football stadium. Two years after Ray was fired, Fran Curci capitalized on the sparkling new Commonwealth Stadium and give UK two consecutive winning seasons with a Peach Bowl championship in 1976 and a 10-1 season in 1977 that was marred by a NCAA bowl ban caused by recruiting violations.

No. 4 —- Claude Bassett, UK football recruiting coordinator. Hired by then-head coach Hal Mumme, Bassett singlehandedly brought UK football to its knees by blatantly cheating with his recruiting tactics (which had roots from the old Southwest Conference). His tactics brought UK severe NCAA sanctions and left the school dangerously close to the death penalty, according to longtime UK athletic department sources.

No. 3 Elliott Uzelac — UK Football offensive coordinator. Between then-head coach Bill Curry’s stubbornness and Uzelac’s inability to see the talent in quarterback Tim Couch, UK football missed out on what could have been a special threeyear run of success, but had to settle for one mediocre year and one Outback Bowl appearance when Curry was finally ditched and offensive minded Mumme was brought in.

No. 2 — Paul “Bear” Bryant. The legendary UK, Texas A&M, and Alabama head football coach was run out of Lexington because (pick your poison) UK Athletics Director Bernie Shively and influential basketball supporters namely (Gov. Albert Benjamin “Happy” Chandler) chose to honor Adolph Rupp’s basketball success over the Bear’s achievements in football. There is the long standing story of UK giving the cigarette lighter gift to Bryant and the Cadillac to Rupp after both had a successful season. However, many old school UK insiders who are still with us claim that Bryant was run out of town because he secretly dated a daughter of Gov. Chandler, which led his wife Mildred “Mama” Chandler to instruct Happy to have that old mean and hateful football coach run out of the Commonwealth.

Kentucky football has never recovered and probably never will again reach the major bowl-game level Bryant once had it.

No. 1 — Billy Clyde Gillispie. This former UK men’s basketball coach was hired by current Athletics DIrector Mitch Barnhart and may be the worst hire in college basketball history if not college sports history. The fit between the coach and the program he was hired to run was about as night and day bad as it could be.

Many longtime UK basketball followers and veteran national sports writers across the nation have told me personally that even with several years of probation attached to the storied program’s history, the night that Gardner Webb beat UK in Rupp Arena (84-68) was quite possibly the low point of UK basketball in the modern era. It most definitely was the starting point to get Gillispie out of the Bluegrass.

Special Note: If you’re wondering where former UK basketball coach Eddie Sutton’s name is on this list, I did consider it but at the end of the day I thought the fact that Sutton didn’t have but one bad year (his last just after the Emery Air Freight package of cash popped open in a unique fashion). If it had been a top 10 list, Sutton would have been involved.

Now I leave you with this question: Were the last two years of Joker Phillips football as bad as any of the messes mentioned above?