Joker ‘preaches’ one game, ‘coaches’ another 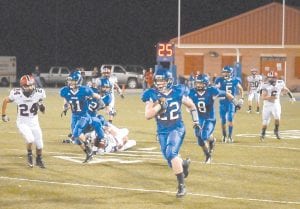 AHEAD OF THE PACK — Letcher County Central’s Chris Tyree (22) outran everyone else on the field on his way to a 98-yard kickoff return during the Cougars’ game against Russell County.

After Saturday’s latest performance by once-top prospect Morgan Newton from behind center I’m trying to visualize what that close quarterback competition looked like that UK Coach Joker Phillips so vividly talked about for three weeks in the pre-season.

Evidently nobody on the coaching staff conducted curfew checks last week, because it appeared to me that Newton played as if he spent the last four days frolicking outside Memorial Coliseum with the masses standing in line for Big Blue Madness tickets.

It’s difficult for me to understand why Phillips would beat that drum of “we’re in a rebuilding cycle” and “we’re so young with 72 freshman and sophomores on our roster” and then turn around and replace his injured starting quarterback with a senior who has been terribly inaccurate and inept at reading defenses his entire career. And he did this with a talented freshman QB on the sidelines whose redshirt was pulled two games ago? 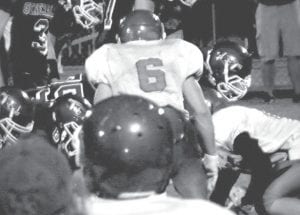 Jenkins High School’s Cody Childers waited for the ball to snap during the Cavs’ win over Jackson County. Childers had a key fumble recovery during the game.

I’m confused. What do you gain short term or long term by doing this? Please, somebody help me out with the rationale in this decision.

With last Saturday’s 38-0 loss to Florida, the “fellowship of the miserable club” should be at peak membership this week across the commonwealth. If that is not enough for Phillips and Athletics Director Mitch Barnhart to deal with, don’t expect any mercy from the “ole ball coach” Steve Spurrier when he rolls into Lexington with his South Carolina team for Saturday night’s nationally televised game at 7 on ESPN2.

New Florida offensive coordinator Brent Pease (formerly of Kentucky) announced a goal of hanging 50 points on the struggling Wildcats when they arrived at The Swamp. Thanks to a UK defense that didn’t waiver in its commitment to improve on recent embarrassing performances, it never happened. But Kentucky’s inept senior Newton contributed his fair share to Pease’s cause and in the process buried any chance the Cats had of extending a competitive first quarter. Newton’s second quarter performance included three interceptions and a countless number of passes that sailed several feet above or in front of his own receivers.

By halftime UK was looking up at a 31-0 deficit and strangely enough had already accumulated more yardage (112) on the ground than their per game average for all the previous three games this season.

Be that as it may, what happens at the start of the second half when UK gets the ball first with a fresh opportunity to change the direction of the downward spiral Newton had put the offense in? Out trots Newton to once again lead the Wildcat offense. Finally, after an even more embarrassing third quarter exhibition of only 24 yards of offense, UK brought in true freshman Jalen Whitlow for some game experience.

In the Cats’ next to last offensive series, the coaching staff finally gave in and showcased the freshman duo of QB Whitlow and RB Dysham Mobley, who between them gained 24 yards rushing on three consecutive plays that produced two first downs. And what brainstorm did that produce from the UK offensive gurus? Three consecutive drop backs for passes that all fell to the turf. Go figure.

Try as I might, it’s hard to defend a head coach who preaches one game and coaches another. I can’t see the UK brain trust at the top going much longer without being forced to make some type of decision concerning the leadership of this program, and I’m not talking about senior leadership.

Which brings me to this question: Is it too early to start talking seriously about who the next coach will or should be?

Let’s go ahead and move Mississippi State up and out of that lower tier of the SEC and replace them with Missouri. Hey Mizzou, you wanted in. Be careful what you ask for in the future.