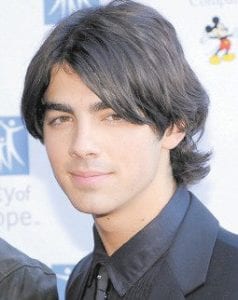 Joe Jonas from The Jonas Brothers is shown in this photo from September. (AP Photo)

Joe Jonas is tired of hearing about how he’s a bad boyfriend — and now he’s trying to defend himself.

The 19-year-old — part of dreamy teen band the Jonas Brothers with his two siblings — has gotten an avalanche of negative publicity after former girlfriend and fellow multiplatinum singer Taylor Swift dished about their recent breakup, which she says came in a 27-second phone call. She also was quoted as saying that he dumped her after meeting actress Camilla Belle.

The revelations have been hot topics on the blogs and have muddied his reputation as a clean-cut, upstanding heartthrob.

So, in a posting on the MySpace.com celebrity blog page Nov. 13, the singer sought to give his side of the split, though he didn’t mention the 18- year-old country star by name. (It had also been posted to the Jonas Brothers’ own MySpace page but had been removed by Nov. 14.)

“I never cheated on a girlfriend. It might make someone feel better to assume or imply I have been unfaithful but it is simply not true,” he said. “Maybe there were reasons for a breakup. Maybe the heart moved on. Perhaps feelings changed. I am truly saddened that anything would potentially cause you to think less of me.”

As for the quick phone call, he said: “I called to discuss feelings with the other person. Those feelings were obviously not well received. I did not end the conversation. Someone else did. Phone calls can only last as long as the person on the other end of the line is willing to talk. A phone call can be pretty short when someone else ends the call. The only difference in this conversation was that I shared something the other person did not want to hear. ”

Jonas said he has tried to call Swift since then and has gotten no response.

He said he wishes the best for “the other person but could not sit back any longer and leave our fans with a wrong impression of the truth. Hope this helps enlighten a little.”

Swift has said Jonas inspired at least one heartbreak song on her new CD, “Fearless,” and in a recent interview with The Associated Press, she said: “If you don’t want me to write about the things that you do, then don’t do bad things for me to write about!”

But in response to Jonas’ online posting, her publicist, Paula Erickson, simply said: “Taylor has moved on.”