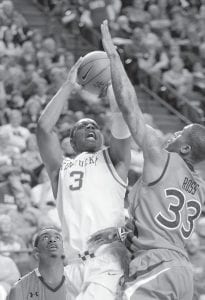 Kentucky’s Terrence Jones (3) shot over Auburn’s Earnest Ross (33) during the second half of Tuesday’s game in Lexington. Jones had 35 points in the 78-54 Kentucky win. (AP Photo/Ed Reinke)

When Doron Lamb set a Kentucky freshman scoring record with 32 points in a victory over Winthrop last month, coach John Calipari didn’t get too excited, saying he wasn’t sure how long the mark would hold up.

It didn’t even last a month.

Terrence Jones, coming off the bench for the first time in his brief career, one-upped his classmate by scoring 35 points on Tuesday night as the 13th-ranked Wildcats rolled by Auburn 78-54.

Jones walked off the Rupp Arena court to a standing ovation and shared a quick laugh with Lamb. Asked what he told Lamb after erasing him from the record books, Jones laughed and said, “I told him I’m sorry.”

No need to apologize.

Pouring in a variety of jumpers, layups and 3-pointers, Jones showcased his considerable skills by dominating whoever the Tigers threw his way.

“He’s a grown man,” Auburn coach Tony Barbee said. “At a very young age he’s an impressive player because he’s physically a man but he’s also got the skill level to match it.”

Jones broke the record by playing the same sixth-man role that Lamb has so eagerly embraced. He missed practice on Monday while battling a nasty cough that occasionally produced blood. He wasn’t sure he was going to play at all until after the team shootaround early Tuesday and didn’t flinch when Calipari told him Lamb was going to replace him in the starting lineup.

“I just wanted to do the little things on defense, run the floor hard and shoot it when I was open,” Jones said.

Which was more often than Barbee would have preferred. Jones made 11 of 17 shots, including four 3-pointers, and grabbed eight rebounds in 30 mostly energetic minutes as Kentucky (13-3, 1-1 Southeastern Conference) easily avoided its first losing streak under Calipari.

“ I’m happy for ( Jones), he showed some initiative,” Calipari said.

Something Jones has lacked at times this season. Calipari criticized the team as a whole for being too “content” with their roles, saying the Wildcats needed to be more committed.

They were at times against the Tigers (7-9, 0-2), needing less than 10 minutes to build a 19-point lead. Yet the massive blowout never came, as Auburn continued to scrap.

Allen Payne led the Tigers with 15 points and Kenny Gabriel added 13 but the basketball team couldn’t muster the magic the football team used to win the national championship on Monday night.

Barbee said his players watched the school’s 22-19 win over Oregon in the national championship game in their hotel rooms, adding security was called to his suite “about 20 times” because he and the rest of his staff were getting a little too loud.

The Tigers could have used some extra bodies to slow down Jones, who entered the game about 5 minutes in and immediately took off.

Chastised by Calipari for too often settling for jumpers, Jones scored his first two baskets on layups to build some confidence and kept building on it.

“You could tell he was feeling it,” said Lamb, who finished with eight points and seven assists. “I knew he was going to break it.”

The outburst helped Calipari improve to 4-0 against Barbee, who played for Calipari at Massachusetts and later served as an assistant under Calipari at both UMass and Memphis.

Barbee called Calipari the most influential man in his life behind his father. While Calipari believes Barbee can turn around Auburn’s moribund basketball program, Calipari’s team showed just how wide the chasm is between the Tigers and the top teams in the SEC.

The Tigers shot 34 percent, turned it over 15 times and never threatened to give the Wildcats their first home loss during Calipari’s tenure.

“ We play together, we play unselfish, we play hard, we scrap, we fight,” Barbee said. “We just right now are not on the same level talent-wise as (Kentucky.) And it’s going to take some time to build it up.”

Kentucky freshman center Enes Kanter, ruled permanently ineligible by the NCAA for accepting improper benefits from a Turkish club team two years ago, appeared to be embracing his new role as an undergraduate assistant. Kanter, wearing a white sweat suit, held a clipboard at times.

For a night at least, Kentucky didn’t need him on the court.

Auburn managed just six firsthalf points in a loss to LSU last weekend. The Tigers weren’t nearly as inept this time, surpassing the mark on a layup by Josh Langford with 10 minutes to go in the half, but all it did was cut Kentucky’s lead to 17 points.

Still, Auburn kept battling, getting under Jones’ skin at one point. He was fouled while being trapped in the backcourt on one possession and fell to the ground. Before he could get up Payne came perilously close to stepping on him. Jones took exception while he scrambled to his feet and the referees stepped in to separate the players.

Jones exacted a bit of revenge just before the half, grabbing a rebound then dribbling up the court as time wound down. He pulled up and hit a 3-pointer as the horn sounded to give Kentucky a 41-21 lead and remind the Tigers that football season is officially over.

“Yeah, I was going to take that one all the way,” Jones said. “Five, four, three, two, one, those are the shots you think about.”