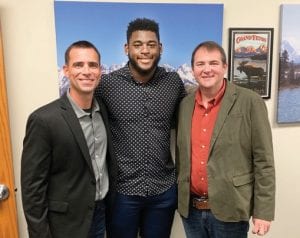 Kentucky defensive lineman Josh Paschal could make a big impact on the football field for coach Mark Stoops’ team this season. However, he’s already making an impact off the field.

Recently he shared his story and testimony at Versailles Baptist Church and very little of the talk had to do with football.

“He didn’t talk much football. He mentioned his teammates and some stuff but his talk was definitely more centered on his relationship with Christ. He talked about FCA (Fellowship of Christian Athletes) and what it has meant to him,” said Dr. Michael Cabell, senior pastor at Versailles Baptist.

Cabell has been friends with Aaron Hogue, central Kentucky FCA area director, since college. He knew about some of Paschal’s story through Hogue.

Paschal became a Christian April 29, 2018, and Kentucky coach Mark Stoops attended his baptism. Paschal had a solid freshman season as a backup linebacker but had been moved to the defensive line in spring practice to get him on the field more last season.

I was at a Mercer County youth football camp in July when he talked about how eager he was to help UK and how optimistic he was about the season. A few weeks later he was diagnosed with skin cancer at about the same time offensive line coach John Schlarman started his cancer treatment.

“His story was so impressive,” Cabell said. “What really stuck out to me was that he’s been a Christian for just a year yet he was so articulate about his faith. We had a lot of young folks at the service who I hope were really impressed but what he said.

“Josh said until he became a Christian his identity was found in football and the SEC. Now he says his chief identity is being a Christian. We had a bunch of 10 to 12 year olds listening and I hope they listened to his message that there are greater things in life than football.”

Cabell says he often sees people of all ages find their faith after being hit with adversity like Paschal’s cancer diagnosis. However, the senior minister noted that Paschal made his confession of faith four months before his cancer diagnosis.

“He shared how his faith really helped him with his cancer struggle,” Cabell said. “I think it really helped so many for him to share that during our church service. I think it did surprise some folks with what he said. Any time we see an athlete perform at a high level who became a Christian … it made for powerful testimony. You don’t see that much, especially from a top of the world type guy like Josh.

“To use his platform as a football player to share his faith is powerful. He said football is still important to him but since he became a Christian it is no longer the most important thing in his life.”

Because he’s been a college coach and also had a successful playing career of his own, Tyrone Black has tried to help prepare his son, guard Tyrese Maxey, for what his first season at Kentucky might be like.

“Pace of play is really different in college. His has got better and a lot of that comes with maturity,” Tyrone Black said. “We watch a lot of film together. I try to explain to him that there are five gears and the great guards are able to play fast and change speeds and yet still read the game and let it play at a slower pace in their minds.

“I think he is evolving into that at the right time and that will really be important next year when he’s playing at Kentucky. The great guards have to be able to do that.”

One plus Tyrese Maxey should have is that he’s been a solid defender for years and has embraced the value of defense.

“He’s always been very competitive but somewhere around his freshman year he decided to take the challenge of guarding the other team’s best player and really getting after him,” Tyrone Black said. “He listens to me a lot about how important defense is and how being a complete player means more than just being able to score.

“On the Nike EYBL, he was the defensive player of the year. He wants to be an elite defender but there is more to that than just guarding your man. You have to defend cuts, defend screens. I think he understands that’s all part of what being an elite defender is.”

South Carolina cornerback Andru Phillips said he had “felt a lot of love coming my way” since making his verbal commitment last week to play football at Kentucky.

“Everybody has my back. It’s just been great since I committed. I feel relieved to have the decision made,” Phillips said. “I had several options and my friends were not certain what I might do but I think they kind of knew it was probably Kentucky for me.

He is ranked among the nation’s top 60 cornerbacks in the 2020 recruiting class by 247Sports. He had offers from a variety of schools including Virginia Tech, Tennessee, Louisville, Wake Forest and West Virginia. His decision basically came down to UK over Virginia Tech.

His father, Carlos, is from Owensboro – his mother is from Danville – and won a state title there playing with former UK star Mark Higgs. Carlos Phillips also played at Kentucky for coach Jerry Claiborne. Andru Phillips lived in Louisville through middle school when his father took a job in South Carolina. Andru Phillips’s brother was an offensive lineman at Morehead State from 2013-16 and started 46 straight games.

“I grew up in Louisville going to UK games and being a fan and everything,” the 5-11, 180-pound Andru Phillips said. “Dad has a lot of people who know about his career and he tells me a little bit about the kind of player he was but he doesn’t talk a lot about himself. He was there with me the whole recruiting process but never once told me he wanted me to go to Kentucky or anywhere else.”

Andru Phillips still has grandparents living in Kentucky and admits being close to family helped influence his decision to commit to UK.

“It is just home. Any time I go back to Kentucky, I just feel great overall,” he said.

He had the same feeling watching the NFL draft when UK cornerback Lonnie Johnson was picked in the second round and safety Mike Edwards in the third round. Three other UK defensive backs signed free agent contracts after the draft ended.

“The draft really opened my eyes and showed what could happen at Kentucky and that they could put players in the NFL just like anybody else,” Andru Phillips said.

He said if secondary coach Steve Clinkscale could have that impact in the short time he’s been at Kentucky, he wants to be part of that.

“I feel like I’m similar in skill set as those guys. I feel like I can do what they do. I just have to be coached up and go out there and perform,” Phillips said. “I am a really physical corner. I can cover (the pass) well, too. Mainly, I am just very physical in everything I do. I have good speed. I run track. Last year as a sophomore I was runner-up in the state triple jump (49 feet, 1 inch).”

Kentucky shortstop Katie Reed will be playing in her fourth straight NCAA Tournament next week and is part of a senior class that has won over 150 games.

She had started 227 consecutive games in her four years going into this week’s SEC Tournament and had 249 hits, 142 runs scored and 117 runs batted-in. Teammate Abbey Cheek is already UK’s all-time home run and RBI leader as well as the leader in runs scored. Catcher Jenny Schaper has been a four-year fixture behind the plate.

How will Kentucky coach Rachel Lawson ever replace such a talented trio along with their other senior teammates?

“This year we have huge freshman class,” Lawson said. “I think they will be ready next year. They will have some positions to fill, but coach Lawson talks about never having a rebuilding year. After my freshman year we lost six seniors, but we did not want to spend a year rebuilding. I hate we will not be here next year but the younger players have learned about everything we do and what is expected of them.”

Reed admits it will be an “adjustment” for teammates not to have five seniors to lean on next season.

“For coach Lawson, having Jenny behind the plate four years has been special. She’ll have to adjust to a new catcher and that is a big deal,” Reed said. “Abbey’s bat will be hard to replace. She’s one of the best players in the country.

“But this is why you have to recruit and why you bring in players and have senior leaders to show them what to do and what is expected of you. Hopefully our senior class has done that for the players following us.”

Quote of the Week: “Coach Cal is a great coach. They’re always going to compete for a national championship, which is what I want to do. But right now I have the same interest in Kentucky as everybody else. It’s kind of open to everybody,” Cade Cunningham, one of the top 10 recruits in the 2020 class, on Kentucky.

Quote of the Week 2: “I defi- nitely want to have a very, very big summer, working on a lot of my weaknesses, and try to become that much better over the summer. Have no weaknesses when I come back, build up my body, and just try to come back a monster,” former UK player Nerlens Noel on next season in the NBA.

Quote of the Week 3: “We take a lot of pride in preparing our kids for the next step in their lives. Whether that’s playing professional basketball or getting a degree to go on and pursue what their ‘genius’ is, we have a job to do to make sure they’re ready for the rest of their lives. To earn this honor for the fifth straight years proves our kids’ commitment to being lifelong learners. I’m incredibly proud of what our kids do with what they’re been taught here when they leave Kentucky. They’ve all learned to give back,” Kentucky coach John Calipari after his team was recognized for its Academic Progress Rate scores.