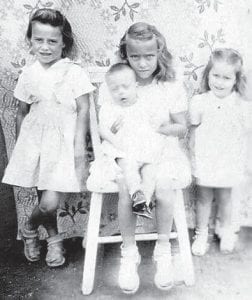 Praise the Lord, Mom has been back to the rec center and also Senior Citizens. She was able to ride the stationary bicycle and do a few exercises without any pain in her rib at all. Everybody was so glad to see her and told her so.

Irene Banks said she now knows why the lights got brighter in the building all at once. Mom sure has a way of making everybody want to be a better person.

However, the news on Junior Kuracka isn’t as good. He has had a setback and isn’t out of the hospital as of Sunday the 4th. They were planning on transferring him to the nursing home but couldn’t because of his recent setback. They really need our prayers.

Our friends Doug and Pat Wright haven’t been to the rec center in quite awhile and we want them to know we miss them very much.

Birthdays for the month of March at Letcher County Senior Citizens are Martha Burns on the 1st, mine is on the 18th, Marvilene Quillen and Jo Ann Watts both are on the 19th, and Peggy Sturgill on the 26th. 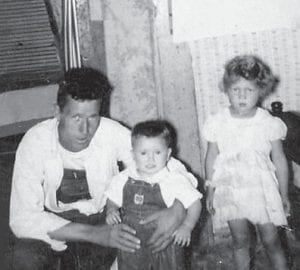 Eli Stidham sits with his children, Emory and Altonia

My only brother, Albert Tacket, also has one on the 25th and although he lives in North Carolina, I am going to take this opportunity to wish him a happy 58th birthday.

I’ve been thinking back through a lot of my childhood here lately and my daddy, Marshel Tacket, comes to my mind so much. He died on March 19, 2004. Hard to believe that was 14 years ago.

He was born in Campbell County, Tenn. They lived on Caryville Mountain and he told so many tales throughout the years about his life there that you could just imagine what it was like and it would make you wish you had grown up there just as much as the Marlowe Mining Camp stories makes you wish you could have grown up there.

He kept a journal when he was a young man and put a lot of those stories down for us to read. We love reading it now and also loved reading it when we were younger.

A few of these stories were printed in a little book called “Generation” by Eastern Kentucky Youth Media Workshop back in 1978. Here is one of the entries that was printed in that book. I’ll type it just as he wrote it, misspelled words and all.

“Some say the past is gone, so let us forget it. But I’m a strong believer in keeping record of the past. What has happened in the past can help us in the present. If we know how to study the past. I always have liked to set and here someone tell of their bygone days. How they met, courted, and married their wife. What a hard time they has as a young couple. And to hear old men tell of their hunting and trading trips with wagon and team or in the saddle. When sickness struck or fire broke out. Or maybe hear them tell about those hard winters and how they cooked and eat with no stove just cooked it over the fireplace.

“Mommy could make a garden that nobody could beat. I remember it well, she would have us push a little plough with a wheel on it. She would see to it everything went her way in the garden. She was good at sowing beets, everybody talked how she could raise such pretty beets.

“We had an old big apple tree above the tater patch we called the “betwicks and betweens” apple tree. We say it ain’t sweet nor it ain’t sour it is betwicks and betweens. It’s a tree bigger than any on the place. We had most places named something, like a little hill down below the house Dora named it the failed to gobble hill. I never did know what she meant, but she would laugh when she called this little bank by name. I remember Dora helping us hoe some taters one time. She stopped to rest and leaned on her hoe handle and said ‘I’ll be married before these potatoes are dug.’ We laughed at her. She helped eat that batch and about 10 more before she found her true love. Hubert got tired of planting beans and put a whole passel under a big rock. They come up the same like the others. To his surprise! Anything done in the dark will come to the light, you know.”

This was just a little bit of what he had written. He also drew maps of the lay of the land they lived on with the animal pens and certain fruit trees and such. It was way up on top of a ridge and they had to walk off and on to visit with any of their neighbors.

They had no electricity and didn’t really want it. Can you imagine how hard the women had it to keep up with all the housework, laundry, cooking, and caring for the children?

On the same note here is a post on the Growing Up in Marlowe Camp Facebook page that I loved. The comments were written about a picture that was posted. It’s the one shown here with Eli Stidham with two of his children, Emory and Altonia.

JoAnn Howard Brown – How cute is this!

Sue Reed Morris – Debbie, I sit sometimes and think about how hard it was on moms doing everything they had to do! Never complaining but loving us kids and taking care of us was their reward! I love my mom so much and thank God she raised us knowing right from wrong and brought us up as decent human beings.

Margaret Combs – I love this picture. Brings back so many memories. Look at the iron on the mantel.

Jerry Allen Mace – Ha! I wish I could know who the heck is that woman over the mantel.

Remember what Oma always said, please try your best to be in church Sunday and I say if your church has services throughout the week or on Sunday night God would want you there then, too

But, I do need to add this, remember the family of Donell Morton in your prayers, and also all the others who have lost loved ones. Especially my pastor, Bill Jones and his wife, Sandy.