These Letcher County Central High School JROTC cadets conducted a roadside cleanup during which they picked up 38 bags of trash.

The Letcher County Central high School JROTC cadets this past Saturday conducted a roadside clean-up on Pine Mountain to Cowan School. Thirty-eight bags of trash were filled. The cadets expressed their appreciation to all the people that slowed down and gave their support during this clean-up.

Cadet Captain Kevin Johnson found a U.S. flag in the dirt in a ditch. He was very upset that it was laying in a ditch. He asked what the country is coming to when our flag can be found laying on the ground like it was.

The cadets will conduct a flag retirement ceremony for this flag and any other flag that anyone would like to turn into the high school to the JROTC program. 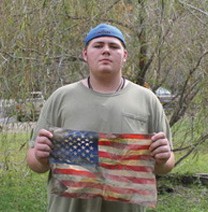