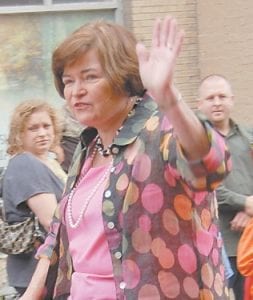 “I think it is the greatest of honors,” said Combs, of Stanton. “It’s fun. It’s almost Cinderella stuff.”

Combs said the parade is a community tradition.

“This is a ritual that is important to the town,” said Combs. “This is a coming together. It is a part of the community. It isn’t just an event.”

Combs said she was honored to spend time in Whitesburg on Saturday.

“I just love the mountains so much,” said Combs. “Not only are they covered with all of this beautiful vegetation, but the depth of riches — coal underneath, trees on top. The people are the real natural resource.”

Combs said her husband, late Kentucky Gov. Bert T. Combs, enjoyed the direct contact of looking someone in the eye.

“My husband used to say the thing that is really wrong with politics was the distance political figures and candidates have created between themselves and the public,” said Combs. “He thought that the greatest way was to do whistle stop campaigns where you go to town after town on the back of a train and really lay eyes on the people and the motorcades where you’d actually make physical eye contact with the people.”

Combs said meeting someone face to face gives her a heightened sense of responsibility.

“You don’t want to disappoint someone you have looked in the eye,” said Combs. “You want them to be proud of the service you are doing on their behalf.”

In June 2004, Combs became the first woman and the first judge from the eastern Kentucky counties of the 7th Appellate District to serve as chief judge of the Kentucky Court of Appeals, a position which she held until May 2010.