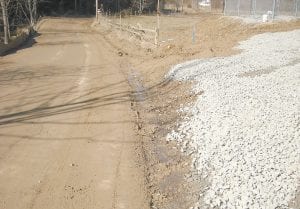 A MUDDY MESS — A state highway official says workers for Kinzer Drilling of Floyd County have been working this week to try to clean up this eyesore on Kentucky Highway 2035 at Little Cowan. The mud was carried onto the road by heavy trucks going to and from a natural gas drilling site near the base of Pine Mountain. (Photo submitted)

U.S. Circuit Court of Appeals for the District of Columbia Judge Stephen Williams ordered the federal Mine Safety and Health Administration to reconsider rescue team rules covering small coal mines. Current rules allow teams at mines with fewer than 36 employees to train just once a year.

Williams also ordered MSHA to eliminate a rule allowing teams of state mine inspectors to substitute work for rescue practice.

“MSHA attempted to water down the requirement that mine rescue teams train at least twice a year, but the court said no,” Roberts said in a statement. “Coal miners and our families have learned the hard way that well-trained mine rescue teams, responding immediately to incidents in the mines, can save lives.”

It’s unclear how much the added requirement might cost the nation’s 600- plus underground coal mines.

Williams did uphold several other portions of the regulations, including a provision that allows training exercises to be substituted for rescue contests.