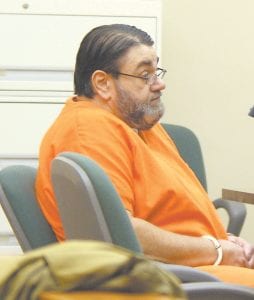 A judge denied a request to reduce the bond of a former teacher accused of sexual offenses with a 14-year-old student after a prosecution witness read text messages the teacher wrote to the girl in open court.

Charles Evans Hall Jr., of Jackhorn, will remain in the Letcher County Jail, where he has been incarcerated for nearly four months, in lieu of a $250,000 cash bond.

Commonwealth’s Attorney Edison Banks maintained that Hall is a threat to himself and others, and that he has the financial means to flee prosecution.

Hall’s attorney, Daniel Dotson, turned Hall’s passport over to the court during the bond hearing, but Banks suggested that just the fact Hall had the passport in his possession was suspicious. Hall’s estranged estranged wife testified that the passport was normally locked in a container with family birth certificates, and she did not know when he had removed it.

Dotson told the court that he did not expect Hall to “be like Eric C. Conn,” the infamous eastern Kentucky disability lawyer who was captured in Honduras six months after escaping federal custody while on home incarceration. But Brandee Hall testified under questioning from Banks that she had been told her husband withdrew his teacher retirement after police began investigating him, and Banks said it was an amount large enough to allow him to do exactly the kind of thing Conn had done.

The hearing was held at Banks’s request after Dotson filed a motion seeking to have the bond reduced on the grounds that Hall was not a threat to anyone one in the community or a flight risk, and that the bond was excessive.

Dials confirmed to Banks that he had heard of two other investigations of Hall related to sexual relationships with minors. One in May 2018 involved the same girl, but “never moved forward in the process,” Dials said, because the girl said nothing had happened. He said she said in a later statement that she was “protecting him.”

Dials also confirmed that he had been told of an investigation about 2001, but that he could find no information about it.

Hall went to trial for a misdemeanor in Letcher District Court in that case, but the precise outcome was not known. The Mountain Eagle did not report about the case at the time because it involved a misdemeanor, and did not result in a conviction. No court record of that case now exists. Why there are no court records was not clear, but a defendant can move to expunge his or her record within a set number of years, and it is as though the case never happened.

Banks also asked Dials to read quotations from text messages recovered from the Internet social media services Instagram and SnapChat in which someone police presume to be Hall told the 14-year-old he loved her, and that she needed to “step up” for him and help him destroy evidence on her social media accounts.

“So please, before we run out of time, let’s unsave so there’s no evidence of anything bad,” one message read. “Just because your mom and the cops seen (sic) it doesn’t mean anything. Got to have evidence.”

In another, the person Dials identified as Hall wrote to her that, “I’m done explaining. You just sit there while my life burns in hell.”

“Bad for job and work, but charges won’t be as bad if no texts or bad pictures,” the message said.

In another message, Hall denied any sexual activity, though Dials said another message that Banks described as “graphic” indicated that a sex act had taken place between the two. Banks did not ask for that message to be read in court.

“I’ll blow my brains out before I go away 30,” another message said.

Dotson questioned Dials about whether Hall was on suicide watch in the Letcher County Jail, but Dials said he did not know. He also questioned whether Dials had found any court records of Hall being investigated in a similar case before, to which Dials said he had not.

Hall’s wife, however, said Charles Hall owns several guns and always carries one in his truck. She also testified that he had broken in the door of their bedroom about the time the investigation began, and had pointed his finger at her head as though it were a gun and said “pow-pow.” She also accused him of tackling her in the hallway when she tried to get away, and said their son had to pull him off of her. That incident resulted in an emergency protection order against Charles Hall.

In answer to a question from Dotson, Hall’s said there had not been any previous protective orders, dating back to when they began seeing each other in 1998.

Letcher Circuit Judge James W. Craft II wasted no time in issuing a ruling after the hearing. Craft found that Hall is a flight risk, a danger to himself or others, and that bond was not excessive. He ordered Hall returned to jail under the same bond.