Judge Wood now retired, but will remain on bench 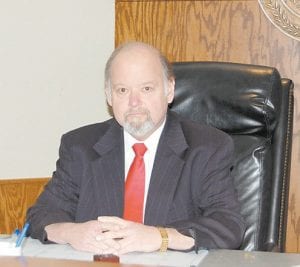 Judge Jim Wood has officially retired from his position with Letcher District Court, but will remain on the bench here until a replacement can be found. Wood is now a “senior status” judge. (Photo by Sally Barto)

Letcher District Judge Jim Wood has officially retired after 16 years on the bench, but will remain on the job here until Gov. Steve Beshear is able to appoint a replacement.

January 30 was Wood’s last official day as judge of Kentucky’s 47th District. Now a part-time “senior status judge,” Wood said his workload reduction was necessary to give him more time to fight the diabetes and kidney disease from which he suffers.

“I actually didn’t want to retire,” said Wood. “It has really been an enjoyable experience. I have always enjoyed going to wor k.”

Wood said that because of diabetes, his kidneys failed back in the summer and he now has to undergo peritoneal dialysis four times a day.

Wood first visited Letcher County 27 years ago. He was just out of law school and drove from Louisville to Whitesburg to see if it would be a place where he would like to live and work. Wood, who never got out of his vehicle on that trip, was told by an attorney from Pikeville that he might like to practice law in Whitesburg.

“I got my map out, drove through downtown, went back and said ‘That will be fine,'” said Wood. “I thought ‘man, what a beautiful place.’ I don’t like the faster pace of the city.”

Wood, who graduated from Western Kentucky University and the University of Kentucky College of Law, said he moved to Whitesburg in August 1982 and began handling a variety of cases after opening a practice with attorney Carolyn Friend, who left Letcher County a short time later.

“Anybody that had a dollar, I would take their case,” said Wood.

Wood later worked as a public defender before becoming an assistant commonwealth’s attorney and assistant county attorney. district judge of Letcher County in 1993. He was preceded in the office by former judges Randall Bentley and Larry Collins, and present Letcher Circuit Judge Sam Wright.

“I had heart surgery about four or five years ago,” said Wood. “During the heart surgery my kidneys shut down and have gradually been getting worse ever since. The primary cause is diabetes.”

Wood will now work 120 days a year for five years. He says he would like to become qualified for a kidney transplant and get placed on the waiting list for a new kidney.

Wood’s wife, Patty, thinks her husband will be remembered for giving defendants the opportunity to change their lives.

“I really have a great respect for him and the job he does,” she said. “I think he is very passionate and has strong convictions. I don’t think he ever crossed that line.”

Mrs. Wood said her husband has a sensitive side that is not usually seen in the courtroom.

“I’ve seen him be very emotional about children cases and lose sleep and literally cry because of what he has to see,” she said. “People don’t usually see that side of him.”

Mrs. Wood said she remembers sitting with her husband at a traffic light when a man in a vehicle beside them rolled down his window and started talking to the judge. The man had been arrested several times and appeared in Wood’s court.

“They always want him to know that they are doing good,” said Mrs. Wood.

“I have people come up to me at Wal-Mart who I have put in jail numerous times and act like we are best buddies,” added Judge Wood. “If you tell people why they are going to jail, they know why they are going and they don’t blame you. They know you are doing your job and treating them like a person.”

Wood said he also has received many letters from juveniles thanking him for helping out. “Treat everybody with the kind of respect that you want to be treated with and you will get along fine,” he said.

Wood said several worthwhile programs were started in district court during his tenure, including a program that monitors people on probation for misdemeanor charges. A truancy diversion program at Beckham Bates Elementary School created by Wood has improved the attendance rate at the Colson school. Wood also started an insurance diversion program in which defendants are required to buy an auto insurance policy rather than just pay a fine for not having insurance. Wood said his court also started holding domestic violence hearings where social workers interview the petitioner.

“We have removed quite a few kids as the result of things we have discovered at the domestic violence hearings — primarily drugs,” he said.

“He’s always been accessible to everyone, not just court officials,” said Watts. “He has always had an open-door policy, which is kind of unusual. It doesn’t matter what I go to him for he always has the right answer.”

Wood said the types of crimes being committed in Letcher County have changed since he became district judge.

“The major way it has changed is that it is drug-related now,” said Wood. “It is people stealing to support their drug habits.”

Wood said he has always had a great support staff, including judicial secretary Debra Gibson, who has worked with him for more than 20 years.

Mrs. Gibson said Wood can always be counted on to provide good advice.

“Anything I don’t know to help somebody, I can ask the judge and he will tell me what to tell them,” she said. “He is very knowledgeable and always available for assistance.”

A native of Louisville, Wood said he has no plans to leave Letcher County even after a permanent replacement is appointed.

“This is home,” he said. “I have no interest in going back to Louisville or anywhere else. People have accepted me and treated me well here. I wouldn’t think about leaving.”