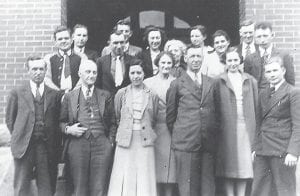 Hello everyone. Hope all is well this week. The weather has been beautiful, people out looking for dryland fish, going fishing, etc.

Pine Creek Pentecostal Church has been having a revival all week with Donald Harding and his family. My son Mike has been going and said it has been a good one.

Judy and Astor Fields Jr. had their 39th wedding anniversary on April 7. They celebrated by having a steak dinner. Late happy anniversary to both of you. Big Cowan

Also, Tony Maggard had a birthday on April 7. We wish him a late happy birthday!

Hillbilly Days will be April 14-16 at Pikeville. I hope to attend one of the days. This is their 35th annual. Sounds like fun.

Arlene Taylor has a birthday on April 15. Wayne Fields will be 46 on April 17.

There will be a baby shower for Deidra and Sammy Gibson on April 17 from 2 to 6 p.m. at Cowan Community Center. Baby Kylee Faith Gibson is due June 4. Congrats.

Chris Taylor, son of Arlene and Marvin Taylor Sr., has a birthday on April 19.

Charles and Shirley Day have a wedding anniversary on April 19.

Brad Jackson has a birthday on April 16, and Tammy Trent has one on April 20. She is the daughter of Hager and Margaret Trent and the mother of Amber Trent.

Kathy and Edward Wolfe will be married 33 years on April 22. Johnny and Ann Collier also have an anniversary on April 22, as do Glen and Dorothy Jean Miles and Paul and Rhonda Miles. We wish all of them the best anniversary they have ever had.

Mike’s little dog Lily was one year old on April 9. She is a min pin and full of energy.

Our son Chad Fields is Indiana gave us a scare the other day having chest pains and soreness in his arm. He was at the ER on his 36th birthday. He had to see his doctor this week and have a stress test done. Keep him in your prayers.

Sorry to hear Oma Hatton has been in the hospital. Hope she is feeling better. Also, Creda J. Isaacs fell and got hurt. Wish her a speedy recovery. They both write for The Mountain Eagle and we would miss their columns if they were unable to write.

Sorry to hear about Missy Fields’s grandmother dying on April 9. From what I hear, she was a real sweet lady. Her name was Lucy Blair and she was Sylvania Whitaker’s mother. Our sympathy and prayers go out to all the family.

A late happy birthday to Thelma Roark Osborne and Gwen Amos, both of Indiana. They are both real sweet ladies that I attended church with.

Glenda Helton had some surgery done. Glad she is feeling better!

Loreva Fields had company a few weeks ago. Her son Tony and wife Thelma came in and her granddaughter Shelba and children were in. Shelba and children stayed with Teresa and Charles Sturgill. They all had a good visit! They all live in Indiana. Loreva seemed to be doing pretty well when I saw her and Teresa at Food City the other day.

My niece Kim and husband Roger Hoskins and Kim’s daughter Dasia are in the process of moving into their new place soon. They bought some land and then bought a trailer. They were working on getting it all set up on Saturday. I am glad for them. It is close to Manchester.

My niece Pam Fields was unable to come in last week to celebrate her birthday. She lives in Arkansas and her Jeep broke down in Nashville, Tenn. so she had to go back home. We will see you next time. Take care. Hope you enjoyed your birthday anyway.

Tommy Fields’s daughter Tosh was in from Greenfi eld, Ind., to visit her dad and sister Ramona Boggs and family and her aunt Jessie Faye. Hopefully she enjoyed her trip.

My aunt Irene Day fell the other day in her kitchen trying to get on a swivel barstool. She hurt her hip and made a knot on her head. She is still pretty sore. God bless her! Eugene is doing pretty well. He’s out and about in the yard sometimes. He loves working with his flowers and bushes. They both do pretty well for their age.

Emma and Francis do a good job helping them as well as Jenny when she’s not working, and of course Paige keeps them entertained.

Audrey Hammonds had surgery last Thursday and is doing pretty well. She spent the night in the hospital. It was surgery on her sinuses. Charles is still having a lot of pain in his arm. He said he and the dog get a break right now because Audrey can’t talk because of her surgery. My husband says, “Every man’s dream is when his wife can’t talk.” LOL .

Mary Lou Fields is back at the nursing home. Carol Ann said that she wasn’t doing very well.

Lots of people to pray for this week so just pray for everyone you know. I will pray for you and you all pray for me. Attend the church of your choice. Be good to one another. Call someone, visit the shut-ins. Until next time.

May God bless each and every one.