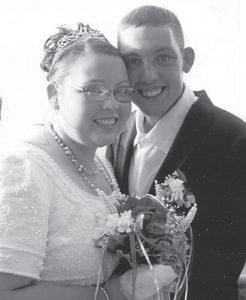 MARRIED — Mikie Jones and Eugene Halcomb were married August 9 at Kingdom Come Park at Gordon. The bride is the daughter of Marlene and Larry Jones of Long Fork, and the granddaughter of Bruce Jones of Linefork and Trill and Marlon Cornett of Gordon. The bridegroom is the son of Preston ‘Rabbit’ Halcomb of Blackey.

“Pride goeth before destruction, and a haughty spirit before a fall.” Proverbs 16:18

This is the time of year when a lot of emphasis is put on spooks and goblins, but I see it as another golden strand in the tapestry of nature as God once again weaves the changing of another season.

During an early morning walk while the fog lies heavy in the valley, the hillside where I live is filled with the intricate workings of tiny spider webs clinging to young sapling branches. It looks very much like puff s of cotton dotting the landscape. The morning air is cool and smells so good, I could inhale it down to my toenails.

I recently met an interesting person visiting our area. Helen Ayers from Indiana, originally from Cowan, and family were visiting ECCO’s thrift store, and from our brief conversation I learned that for 21 years she had been the editor of the local newspaper in southern Indiana. She said she has also written two books on this area. I’m hoping the next time she visits to get more information about her books to pass along. 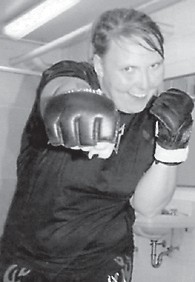 FIGHTER — Crystal Mullins of Jenkins, won a fight at GFC MMA Cage Fighting on Sept. 11. She trains with Eddie and Stacy Trotter and will be fighting again in Jenkins EYE Care on Nov. 6.

I was so sorry to hear that Judy McKnight had died. I missed seeing her at ECCO and after asking around, learned she was not well. I knew she was fighting cancer, Lord how I hate that word, but had no idea she was so ill. Each time I saw her she was always cheerful and smiling giving no indication of getting worse. I’m going to miss her sweet spirit and gentle smile. My deepest sympathy goes to her family.

Paul Swartz from the Vandalia First Baptist Church delivered a trailer load of clothes and household items to our thrift store along with some hospital equipment which we gave to the Whitesburg ARH. With Paul, we never know what we’ll receive next. I remember one time he came with a load of new camoufl age army jackets and black army boots. The Arlie Boggs Family Resource Center was happy to get the jackets and boots. I later learned from Marie the kids were thrilled with the boots; they said they were great for going four-wheeling. 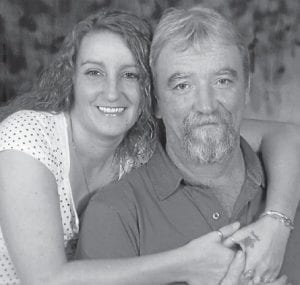 TO BE WED — Diane Sexton and Keith Adams will be married at 5:30 p.m., Oct. 10, at the Old Indian Bottom Association Church at Frog Pond. She is the daughter of Jackie Sexton of Woodrock, and Eli and Virginia Sexton of Letcher, and has a daughter, Katlyn Jent. He is the son of Laura Mae and Courtney Adams of Black Bottom and has two children, Bryan Adams and Derrick Adams. The custom of an open wedding will be observed and family and friends are invited to attend.

Good old Ray Bird made two food pickups for the ECCO pantry from Middlesboro. Cakes and more cakes. We appreciate ARM for considering us in their giving.

Last week I finally got around to making blackberry jelly from the blackberries Emily picked during the summer, which I had frozen. The next morning for breakfast Emily ate half a jar and took one home with her along with a jar of strawberry rhubarb jam. Don’t you know grandchildren appreciate us more then anybody.

With that I’ll leave you with this thought for the day. “A pint of example is worth a barrel full of advice.”

Also to be lifted up in prayer are our military troops, the United States, our President and the leaders of our country, all the children hurt by war and the ministry of ECCO.

Until next time from the folks at ECCO, “God bless.”