Independence Day fireworks celebrations will take place in several locations in Letcher County, one of which will include a free concert by country music star Gene Watson.

Fireworks will be seen at the fairgrounds at Isom, beginning at dark Thursday, July 3. The 3rd Shift Band will perform at 7 p.m. and children will be able to play on X-treme Fun inflatables. Food items will be sold at concession stands.

The Whitesburg fireworks show will begin at dusk on Friday, July 4. The show will take place from the industrial site. Food booths, inflatables, games, pony rides and a cakewalk start at 4 p.m. on July 4 at Parkway Plaza. A live American bald eagle will be on display. Woody Pines will perform at 5 p.m., and Eight Days a Week, a Beatles tribute show will play at 7 p.m. Taking the stage at 8:30 p.m. will be country music star Gene Watson.

Watson, who has been performing for more than 30 years, has charted 73 songs on the country music charts, including 23 Top 10 hits and five Number One’s. 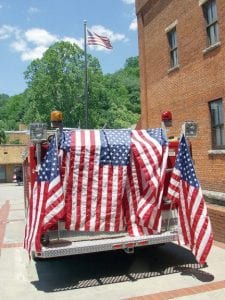 READY TO FLY – American flags were hanging from a Whitesburg fire truck Tuesday as workers were preparing to place them throughout the city in honor of Independence Day.

Watson first made the country music charts with a single called “Bad Water” in 1975. Its follow-up was the sultry, provocative “Love in the Hot Afternoon,” which launched Watson’s long hit-making career.

In case of rain, concerts will be held at the old Whitesburg High School gymnasium, and fireworks will be rescheduled for July 5.

The City of Neon and the Neon Area Day Committee will also have a fireworks display beginning at dark on July 4. Festivities including food, games for children, firetruck rides, motorcycle rides and inflatables will be from 11 a.m. until 11 p.m. at the stage on Main Street in Neon. Legacy will be among the bands performing on the stage.