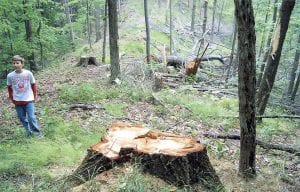 WHERE TREES ONCE STOOD – Derrick Day, 11, was photographed on May 30 visiting a ridgetop at Cowan where valuable hardwood trees were stolen from his family in February. A Letcher District Court jury this week found two men accused of taking the trees without permission guilty of criminal mischief.

A Kingscreek logger and his son were convicted of criminal mischief this week in connection with the theft of 10 trees from property belonging to a Cowan family.

Immediately after the verdict was read, Letcher District Judge Jim Wood followed the jury’s recommendation and ordered Roy Logan to serve 10 days in the county jail and to pay a $500 fine. Josh Logan did not receive a jail sentence, but was fined $250.

More importantly, perhaps, the verdict shows that for the first time issue” in Letcher County, it is possible for victims of the crime to get some kind of court justice. 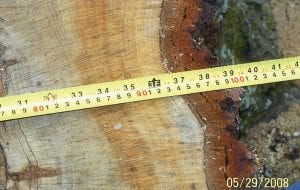 BIG STUMP – This large stump was photographed on May 30 by members of the Day family and Asst. Letcher County Attorney James Hubbard, and shown to a jury on Monday.

“That’s basically what we were trying to do,” said Billy Darrell Day, 49, whose 54-year-old brother Roger Day found the Logans cutting trees in a remote section of Day property in late February. “I just didn’t believe it would really go to court.”

Roger Day, a repairman in an underground coal mine, said he was sitting on his front porch drinking coffee on Feb. 25 when he heard the sounds of a chainsaw and heavyequipment coming from a ridge high above his home on Hampton’s Branch. Day said that after he tried to reach the site by all-terrain vehicle but was blocked by a fallen tree, he watched through binoculars as Roy Logan felled two large trees. Day told the jury he was nearly hit by a third tree as he was walking up a steep hill to confront Logan.

Roger Day also testified that after him if he was cutting trees he didn’t have permission to cut, Logan retreated to the other side of the hill to land where he had permission to timber and began working with Josh Logan while ignoring Day’s presence. Day told jurors that two days later he visited the offices of Letcher County Attorney Harold Bolling and obtained arrest warrants charging the Logans with criminal mischief.

Roy Logan also testified during the trial and denied seeing Roger Day trying to approach him.

“I never laid eyes on that man before I walked into the courtroom this morning,” Logan said while being questioned by defense attorney Jamie Hatton of Whitesburg. “I have no reason to lie.”

Logan, who has been accused by at least two other people of cutting and removing timber from their property without permission, described himself to jurors as a careful logger who learned “how to respect other people’s property lines” while taking master logger’s training over a six-month period. He said it has been his practice to “stay back 50 to 75 feet” when timbering near a property line.

Logan testified there was “no way in the world” he and his son could have removed a 36-inch walnut tree and other large trees from the Days’ property with the John Deere Model 450J bulldozer they were using because it and the wench and 75 feet of 5/ 8-inch cable with which it is equipped are too small to handle the job.

While being cross-examined by county prosecutor James Hubbard, Logan theorized that the valuable trees might have been cut by someone looking for firewood, someone riding an ATV, or by someone who got on the bulldozer after Joshua Logan parked it for the night.

Roy Logan was eventually forced to admit that he had used his bulldozer to move large trees when Hubbard introduced a receipt showing that Logan was paid $496 by Pine Mountain Lumber Company of Whitesburg for a walnut log that measured 10 feet in length and 25 inches in diameter.

Logan also used his time on the witness stand to appeal to the jury to find his son innocent.

“We try to make an honest living,” he said. “If I made a mistake I made a mistake. He (Joshua Logan) shouldn’t even be here. I’ll take full responsibility if that dozer crossed the (property) line. My chainsaw didn’t cross the line.”

Both Roger Day and Billy Day, who drives a rock truck for a Roxana coal company, said their father bought the 50 acres in 1962, and that it has never been disputed that their hilltop property line runs through the center of the ridge.

“That’s what we’ve always been told and everyone’s always respected it,” Billy Day told the jury. He said his father took him and his other siblings on walks along the property line “to make it clear that all of us knew where it was.”

Roger Day told the jury he believes the Logans came onto his family’s property after “he saw a few trees he liked,” and that he believes they would have cut and removed more trees if he had not confronted them and obtained the arrest warrants.

“You get kind of mad when people steal your trees,” Roger Day testified.

Defense attorney Hatton told jurors they should find the Logans not guilty because the “mistake” they made in cutting trees without permission was a “civil wrong” and not a “criminal wrong.”

Prosecutor Hubbard asked the jurors to base their decision on whether they believed the Logans, whom he called “sneaky,” or the Days, whom he referred to as “two hardworking, credible witnesses … who told you their property had been defaced.”

“What would have happened if Roger hadn’t gone up there and watched Roy Logan cut that tree?” Hubbard asked, adding that the Days stood to get “absolutely nothing out of prosecuting the Logans.”