Jury to decide if shooting was in self-defense

‘I didn’t deserve to get shot,’ son says after being wounded by dad 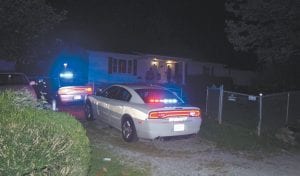 Letcher County Sheriff ’s Lietenant Deputy Brian Damron was among the first police officers to arrive at the scene of Sunday night’s shooting in the Cram Creek community of Mayking. (Eagle photo)

Kentucky State Police will ask the Letcher County Grand Jury to determine whether a 56-year-old Mayking man was standing his ground in self-defense when he shot and wounded his 29-year-old son late Sunday night.

Police say David Oliver “ Big Dave” Fugate shot David Oliver “Little Dave” Fugate Jr. inside the elder Fugate’s home in the Cram Creek community of Mayking shortly before 10:51 p.m. August 24. The younger Fugate remains hospitalized in Kingsport, Tenn., where he is being treated for wounds to his inner thigh and abdomen.

State police say in a press release that investigators were told upon arriving at the scene Sunday that David Fugate Jr. had arrived at his parents’ home and became involved in an argument with his mother, Jackie Fugate. The press release says a female acquaintance, identified later as Jessica Moberly, attempted to intervene, after which she and Jackie Fugate allegedly were assaulted by David Fugate Jr.

State police say no charges have been filed, adding that the case will be referred to the grand jury “as soon as possible.”

David Fugate Jr. was transported by helicopter to Holston Valley Medical Center, where he is recovering from surgery to his abdomen.

In a telephone interview from his hospital bed early Tuesday night, the younger Fugate denied the allegations that he had assaulted anyone.

“He was going to kill me over I don’t know what,” Fugate Jr. said. “We weren’t physically fighting.”

Fugate Jr. told a Mountain Eagle reporter that he had been in one physical altercation with his father, but said “that was about three years ago over some money.”

Fugate Jr. said that he and his parents argued earlier last week after he became angry with them after they picked tomatoes out of a large garden he has been tending at Isom after he told them they weren’t ready for picking. He said he and his parents also had a disagreement Sunday evening after he and his girlfriend returned home from a short neighborhood outing to find money and medicine missing from the apartment in which they were staying next door to his parents’ home.

“I didn’t deserve to get shot,” Fugate Jr. said. “He just walked up and shot me.”

Fugate Jr. said he was walking away from his mother when the incident occurred.

“I stepped into the corner of the hallway to walk on through and I saw him pull the gun,” said Fugate Jr. “He shot me point blank. He just shot me.”

The weapon used in the shooting was a .380 handgun. Fugate Jr. said that after he was wounded in the leg he was “able to bend over and double up” before being shot in the abdomen.

Fugate Jr. credits the quick actions of a cousin who is a nurse trained in emergency medicine with saving his life. He said the cousin, Andy Fugate, was nearby and heard the shots being fired.

“He’s the one who saved my life,” Fugate Jr. said.

He said he expects to remain hospitalized for at least another week.

“ I’m very lucky to be alive,” Fugate Jr. said. “They’ve had to piece my stomach back together.”

Letcher County Sheriff ’s Lieutenant Brian Damron was among the first of what would become many police officers to arrive at the scene of the shooting Sunday, but could not comment on the specifics of the incident because the investigation is being handled by KSP Detective Clayton Stamper.