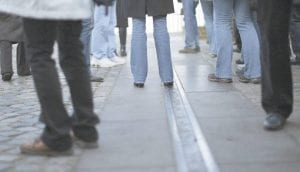 TIME DOESN’T WAIT — Visitors stood around the Greenwich Meridian Line at the Royal Observatory in Greenwich, London, on Tuesday. Scientists will mark the end of 2008 by tacking a second onto the clock, ever-so-slightly slowing the arrival of the new year. (AP photo)

AT THE GREENWICH PRIME

It’s going to take a little longer to say goodbye to the worst economic year since the Great Depression, but all for good cause.

The custodians of time will ring in the New Year by tacking a “leap second” onto the clock tonight (Wednesday) to account for the minute slowing of the Earth’s rotation. The leap second has been used sporadically at the Royal Observatory at Greenwich since 1972, an adjustment that has kept Greenwich Mean Time the internationally agreed time standard.

Some scientists now say GMT should be replaced by International Atomic Time — computed outside Paris — because new technologies have allowed atomic time to tick away with down-to-the-nanosecond accuracy.

A strict measurement, they say, would change our very notion of time forever, as atomic clocks would one day outpace the familiar cycle of sunrise and sunset.

The time warp wouldn’t be noticeable for generations, but within a millennium, noon — the hour associated with the sun’s highest point in the sky — would occur around 1 o’clock. In tens of thousands of years, the sun would be days behind the human calendar.

That bothers people like Steve Allen, an analyst at the University of California at Santa Cruz’s Lick Observatory.

“I think (our descendants) will curse us less if we choose to keep the clock reading near 12:00 when the sun is highest in the sky,” Allen said.

Since the exact speed of the Earth’s rotation can’t be plotted out in advance, they’re added as needed. Sometimes, like this year, they’re added on Dec. 31, sometimes they’re inserted at the end of June 30.

Those willy-nilly fixes can trip up time-sensitive software, particularly in Asia, where the extra second is added in the middle of the day.

Critics say everything from satellite navigation to power transmission and cellular communication is vulnerable to problems stemming from programs ignoring the extra second or adding it at different times.

Although the time will pass in the blink of an eye, Judah Levine, a physicist at the National Institute of Standards and Technology in Boulder, Colo., predicts the change will make him a very busy man starting about 5 p.m. Mountain Time. As part of the institute’s Time and Frequency Division, he’ll be helping to work out the bugs that follow.

“There’s always somebody who doesn’t get it right,” Levine said. “It never fails.”

Britons seemed less concerned about the remote prospect of having tea at 3 a.m. than the notion of leaving a France-based body in control of the world’s time.

“I think there’s some kind of historical pride we might feel in Britain about Greenwich being the point around which time is measured,” 50-year-old telecoms executive Stephen Mallinson said as he waited to board a Eurostar train for Paris at London’s St. Pancras Station.

“But in practice, does it make a difference? No.”

At the Royal Observatory, 53- year-old homemaker Susie Holt was adjusting her wristwatch to match the digital display above the meridian. She said it would be a pity if GMT were made obsolete. Her daughter, 15-year-old Kirsty, was more forthright.

“We don’t want the French to control time,” she said. “They might get it wrong or something.”

Meanwhile, Elisa Felicitas Arias, a scientist at the International Bureau of Weights and Measures, which computes atomic time at a facility outside Paris, has been busy lobbying to scrap the leap seconds that have given the 17th century Royal Observatory pride of place.

“GMT is out of date,” she sniffed.

She said she has been garnering considerable support, with the International Telecommunications Union — the arbiter of international time standards — considering a vote on a switch as early as next year, with a 2018 target to implement it.

The U.S., France, Germany, Italy, and Japan were all on board, she said.

But David Rooney, the Royal Observatory’s curator of time, defended leap seconds, saying they give everyone “the best of both worlds.”

The arrangement, he said, allows satellites, physicists, and high-frequency traders to benefit from the accuracy of atomic time while keeping our clocks consistent with the position of the sun in the sky — and with GMT.

The American Astronomical Society is officially neutral on the proposal to switch to atomic time, which is calculated based on readings from more than 200 atomic clocks maintained across the world.

Perhaps predictably, Britain’s Royal Astronomical Society has come out in favor of conserving leap seconds. While spokesman Robert Massey said star-watchers could cope no matter what happened, he urged caution on such an important change.

“It’s not just a matter for the telecommunications industry to tell everybody to get rid of the leap second,” Massey said. “It would be a big cultural change at the very least. Abandoning the connection between time and solar time is really a big shift.”