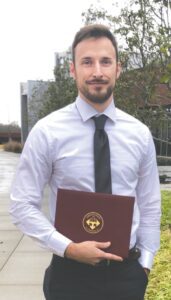 Sharon Maxie, along with Kyle Anaman of Thornton, announces her son, Dylan

Doctorate in Chiropractic Medicine from

Chiropractic Medicine in South Carolina on

He was graduated from Letcher County

Central High School in 2011, and received an Associate Degree in Science from Southeast

College in 2015. He obtained his Bachelor’s

Degree in kinesiology from Alice Lloyd

Also celebrating his achievement is his brother, Ryan LeBrun and grandmother, Effie

Maxie of Thornton, along with family and friends who supported him through these years of study.

County and give back to the community that allowed him to pursue his dreams in the medical field.