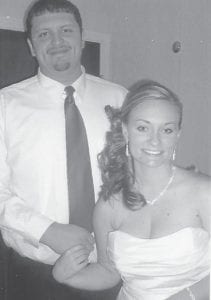 JUST MARRIED — Sabrina and John Holbrook of Whitaker, announce the marriage of their son, Brandon Craft, also the son of the late Michael Craft, to Bobbie Jo King, daughter of Warren and Johanna King of Stanford. The wedding took place at the Best Western of Georgetown on September 4 with family and friends in attendance. The couple are both employed in Lexington and will reside in Georgetown.