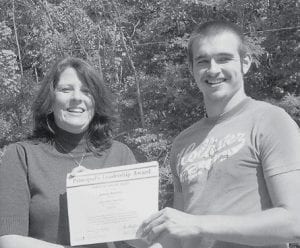 Jenkins Middle High School Principal Teresa Bentley said, “Justin Hunsucker is an extraordinary young man: excellent leader, a tremendous hard worker, and a brilliant student. Justin is striving to obtain the Commonwealth Diploma which is presented by the Governor of Kentucky to those students who meet the requirements for a College Preparatory Diploma and who complete four Advanced Placement courses. Justin serves as the captain of the football team and is a role model for younger student-athletes. Justin is a meticulous student and this carries over into his personal endeavors. For these reasons, I am very pleased to present Justin with the Principal’s Leadership Award, a recognition he most greatly deserves and has earned.”

One hundred national PLA winners will be chosen this spring to receive a college scholarship ranging from $1,000 to $12,000.

High school principals from across the country nominated one of their student leaders. Nominees were selected based on their leadership skills, participation in service organizations and clubs, achievements in the arts and sciences, employment experience, and academic record. They were also required to write an essay.

While at Jenkins Middle High School, Hunsucker has been captain of the football team and a member of the Fellowship of Christian Athletes, National Honor Society, Beta Club, the baseball team, and the basketball team. Next fall, he plans to attend the University of Kentucky to pursue a career in the medical field.