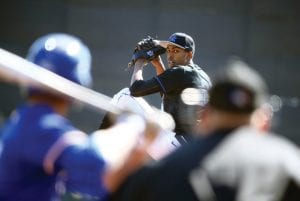 His season has not gone exactly the way he hoped so far, but junior pitcher Justin Lewis does like the way one thing is going — the perception of Kentucky baseball.

“I can tell a big difference. It used to be if somebody asked me I played ball at UK, I knew they meant basketball,” said Lewis, a Georgia native. “Now they let me know that they know I play baseball. That’s really good.

“When all the sports at UK are doing well, it just makes it better for the university. We broke attendance records last year and the buzz coming into this season was really a lot better than ever before. Big Blue Nation is great and we love their support in final season at The Cliff (UK will open a new baseball facility next year).”

Lewis knew the big turnout at Fan Day a few weeks before the season started proved how fan interest had increased for both baseball and softball.

“It’s cool we can come together and have the clinic and have Fan Day together. When I was younger, fans were excited about Georgia Tech and it was great to take pictures and play catch with the players. It’s a lot of fun to get to be around the fans like that,” Lewis said. 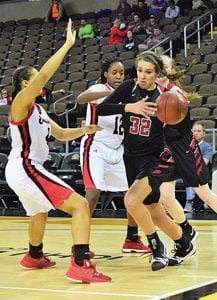 Harlan County’s Blair Green says it “means more” for a Kentucky girl to play basketball at the University of Kentucky. She was 13th Region Player of the Year and a Miss Basketball candidate.

The right-handed Lewis finished his sophomore season with a 3.56 ERA and 71 strikeouts in 92 innings. He had a 6-4 record and became a dependable weekend starter.

He was an 11th-round draft pick of the Tampa Bay Rays in 2017 and many thought he would start his professional career. Instead, he chose to come back to UK where he has a 4-2 record with a surprisingly high 6.11 earned run average in 34 innings. He did throw five innings and gave up just one hit in a 13-3 win over Auburn Sunday.

The 6-7, 195-pounder has had no second thoughts about not turning professional.

“Sometimes when you are waking up for that 8 a.m. class you might have a (second) thought but I couldn’t be happier with my decision. I am ready to win a SEC championship and then also a national championship. We have the players to do that,” Lewis said.

“A very good gene line. Athletics has always been in my blood. My mom was a good athlete and so was my dad,” Lewis said. “I saw Chuck the last time when he was inducted into the (UK Athletics) Hall of Fame. I don’t see him often, but when I do I love talking to him. I saw a stat where he was the shortest center ever to start a NBA game. That shows the heart he has.”

Lewis was on back-to-back high school state basketball championship teams in high school. His team went 32-0 his senior season and was ranked No. 11 in the final poll by USA Today.

He admits he briefly thought about a college basketball career but “enjoyed” baseball too much to do that.

“Sometimes I wish watching those games at Rupp that I could be out there playing,” Lewis said. “We were good in high school. I joke with all the guys on the team that my high school team would beat any high school team.

“I was good. I was the starting power forward. I have lost a step or two but I was pretty good. I was the best defender on the team. I could lock down and guard all positions.”

Could he hold his own in a pickup game with John Calipari’s team?

Kentucky’s basketball season certainly did not end the way players, coaches or fans expected — not after the Cats won nine of 10 games going into their NCAA Sweet Sixteen matchup with Kansas State.

Freshman guard Shai Gilgeous- Alexander became UK’s best player — and perhaps the best player in the NCAA Tournament the first two rounds. He had 15 points, five rebounds and five assists in the 61-58 loss to Kansas State but it was not nearly the type of game he had been playing. He was just 2-for-10 from the field and had five turnovers that led to easy Kansas State points. He did get to the foul line 12 times and made 11.

It was a tribute to him that Kansas State set its defense to stop him.

“We kind of just crowded him a little bit, kind of watched him a lot, just to know what he did,” Kansas State guard Barry Brown Jr. said. In the first half, he was killing us just drawing fouls and getting to the line, 11 of 12 from the freethrow line. For him to finish with 15 (points) just shows that we got it together. Can’t say we stopped fouling, but we stopped fouling him, and we was able to keep him off the line.”

Remember he was not a Mc- Donald’s All-American — or even a consensus five-star recruit. He was expected to be the backup for Quade Green and/or Hamidou Diallo. Instead, he became UK’s best player and more importantly, the team leader. His early-morning individual workouts at midseason led others to do the same thing and that’s when UK’s season took a turn for the better.

“His was an amazing story,” ESPN analyst Dick Vitale said. “Kentucky gets the best of the best recruiting-wise, but he was not supposed to be the star. He played his role and then became their best player. He was not afraid of the big stage. He didn’t hide from the ball at key times. And he was really fun to watch play because of the way he competed.”

Gilgeous-Alexander is projected a first-round pick in the upcoming NBA draft and even as high as a lottery pick in some projections. That means there’s almost no chance he’ll be back at UK but despite the finish when he said “sucked” after the game, it was a memorable year for a player who did all he could to stuff the stat sheet and help UK win.

Juice” Johnson dramatically increased his chances of playing in the NFL with his performance at Kentucky’s Pro Day last week.

Johnson had 48 catches for 539 yards and two scores last season and finished his career with 155 receptions — fourth best at UK — for 2,089 yards and 11 touchdowns.

“The good thing today, though, is that everybody will see and get these numbers and see what he could have done if he had been invited,” Maggard said.

Kentucky signee Blair Green of Harlan County has “no regrets” over her senior season where she averaged 25.7 points and 6.5 rebounds per game and shot 58.9 percent from the field, including 35.3 percent from 3-point range, and 85 percent (162 of 191) at the foul line in 31 games.

Harlan County won the 13th Region and had an 18-game win streak snapped in a state tournament loss to George Rogers Clark.

Harlan County lost its starting center to a knee injury early in the season and that sometimes forced Green to have to do more.

“It was amazing after losing a player to get to the state tournament and help bring us together,” Green said. “Usually I am not a one-person show. I could count on my teammates. I had to work hard and put my team on my back at times but they also did just as much as I did and they would give me the ball so I could score.”

She was 13th Region Player of the Year and a Miss Basketball candidate. She was one of the players honored by the Kentucky Lions Club Eye Foundation at an awards dinner last week.

“It’s an experience not everybody gets,” Green said. “Sometimes we all get to see each other but most of the time it is with a jersey on. This was fun and different to see everybody dressed up and just relaxed.”

She signed early with Kentucky and said UK’s losing season did not worry her.

“I am proud to be going there and we don’t want that to happen again. That’s just going to make us work harder for next year,” Green, who will get to UK in mid-June, said.

She wasn’t surprised that her lifelong friend, UK junior Maci Morris, had a big season for coach Matthew Mitchell’s team.

“She has always been a leader and always stepped up at times when her team needed her. It didn’t surprise me at all what she did this year. That’s just what she does,” Green said. “It will help me a lot having her there but she will definitely push me to be the best I can be. She will be like a big sister and that will be amazing, but she won’t take it easy on me.”

She talks frequently with Mitchell and said he’s excited about the new players the team will be adding.

“He’s excited about all of us getting there because he knows we are determined to help the team get better,” Green said. “I know I am. It means more to Kentucky girls to play for Kentucky. It’s just in our heart. We just work hard and get after.”

She missed six games her eighth grade year with a knee injury — which turned out to be a torn meniscus on which she played half the season without knowin. She missed another nine games her freshman year when she hyperextended the same knee. If she had not missed those 15 games, her career numbers would have been even more mind-boggling.

Quote of the Week: “DerMarr Johnson, I think. Yeah, I think that’s the last one-and-done I had. Ask Calipari. I mean, he’s so much smarter about those kinds of things than I am,” West Virginia coach Bob Huggins when asked who his last one-and-one player was.

Quote of the Week 2: “He’s a terrific basketball coach, great guy, been a friend. I’ve known him for a long time. And he’s got a good job. Georgia is a good job. I think it’ll be great for our league, and it’s going to be great for Georgia,” John Calipari on new Georgia coach Tom Crean.

Quote of the Week 3: “All our quarterbacks are putting the deep balls on the money this year. I think everyone is looking pretty good and we’re going to be a lot better going deep,” sophomore receiver Isaiah Epps.